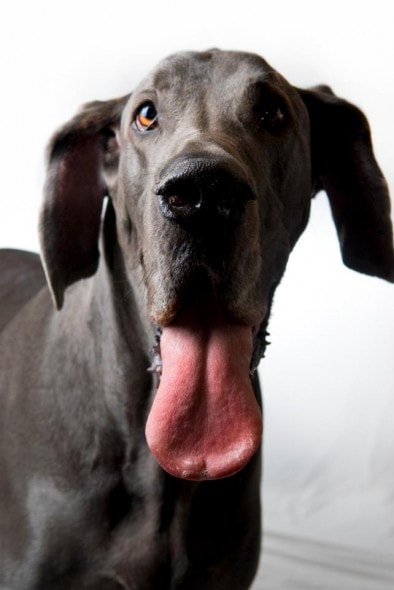 Giant George, a Great Dane that held the Guinness World Record for World’s Tallest Dog for over two years, passed away this week. Beloved by thousands, George used his fame to give back and will be missed by dog lovers everywhere.

On February 15, 2010 Giant George was awarded the titles of “Tallest Dog Ever” and “Tallest Living Dog” by the Guinness Book of World Records. Giant George measured in at 43 inches tall from paw to shoulders.

Giant George soon became a celebrity for his world records and appeared on popular television shows and gained almost 200,000 likes on his official Facebook page. George used his celebrity to help raise money and give back to animal charity. He made appearances at fundraisers and a one hundred percent of the proceeds from Giant George’s online store are donated to help animal charities.

Giant George’s story was also made into a book, written by his owner Dave Nasser. It tells the humorous side of living with the world’s largest dog and demonstrates just why so many people fell in love with Giant George.

In September 2012 Giant George’s world record was broken by a Great Dane named Zeus from Michigan. George continued to give back with the proceeds from his online store, but retired from public appearances and spent his time at home enjoying life with his family.

On Friday The Nasser family announced on the official Giant George Facebook page that George had passed away.

“It is with a heavy heart that we announce Giant George died last night. George passed away peacefully surrounded by loved ones; one month before his eighth birthday,” the post read. “We appreciate the love and support you have given Giant George over the last several years. We look forward to honoring his spirit by continuing his charitable works.”