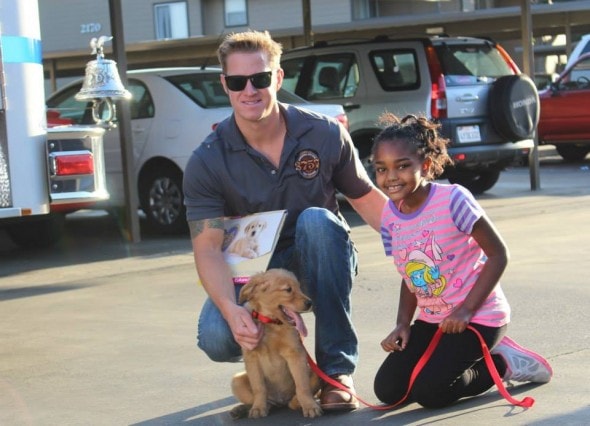 We often write about the heroics of firefighters here at Life With Dogs. They are often saving our four-legged friends from emergencies. Firefighters in Corona, California were heroes in a different way last week when they donated a golden retriever puppy to be trained as an alert dog for an 8-year-old girl who suffers from seizures.

When the Corona Firefighters Association heard about Amira Jones they wanted to help. Corona firefighters became regulars at the little girl’s apartment as she suffers from a variety of seizures and some have been severe enough to leave her in a coma.

Firefighter Trevor Walsh came up with the idea to get an alert dog for the little girl and lobbied the Corona Firefighters Association. Getting an alert dog is no easy task. Dogs typically cost around $18,000 and there is a long waiting list. Finally last week the firefighters were able to present Amira with Mr. Snuggles, a golden retriever puppy.

Amira’s family is extremely grateful for the kindness the firefighters have shown them and how they went above and beyond to help Amira. As Mr. Snuggles is trained he will be able to alert Amira’s mom before a seizure happens giving her time to prepare for the seizure and administer medication so they are not as severe.

“You know, the family didn’t ask for a dog,” said president of the Corona Firefighters Association Jim Steiner. “It was the guys who saw a need. There are big hearts at Station 4.”