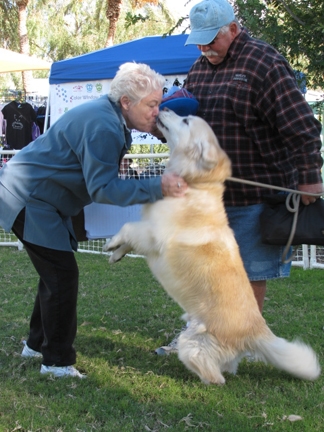 Harley was a dog that a huge impact on everyone he met. When he passed away from Leukemia earlier this month it touched everyone in the Lake Havasu community.

Harley spent his life with Joe and Evie Cistaro, but he had an impact on so many more. Harley came into the Cistaros lives in 2004 and soon became Joe’s best friend.

“I was meeting my best friend that day,” said Joe. “And I didn’t even know it at the time.”

Harley excelled at everything he did, earning obedience certification and therapy dog certification. Harley worked at the local nursing home where Evie’s brother stayed until his death in 2010. Harley was there for him, and continued to help dozens of others at the nursing home after his passing. He also used his therapy skills to help students read at Starline Elementary School.

Joe and Harley were inseparable and soon everyone in town got to know Harley. On July 9th after battling Leukemia for almost 8 months Harley finally had to leave Joe’s side as he passed away. Harley’s passing not only affected Joe and Evie though. As news spread of Harley’s passing sympathy cards flooded the Cistaro home. Everyone from bank tellers, friends, and just about anyone who had the chance to know Harley over the years reached out.

“No matter where I went with him he left an impression,” said Joe. “Every person that he came in contact with, Harley was the centerpiece to everything. Everyone just loved him…I love that dog so much.”