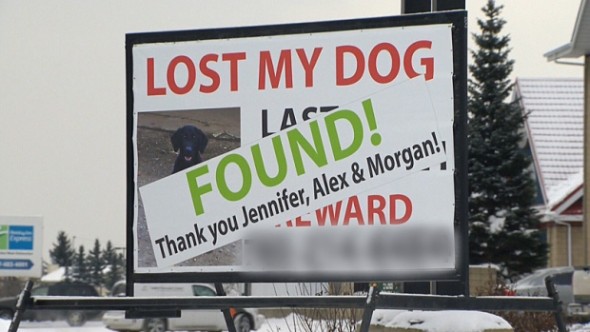 When a dog went missing at the end of October in Edmonton, newspaper ads and lost dog flyers weren’t enough for one dog owner.  He asked to put up a billboard with his missing dog’s information. The billboard now proudly has the word found plastered across it.

The dog owner was staying at a pet-friendly hotel in Edmonton when his dog went missing. That’s when the owner made a request to a portable sign company and the hotel that neither had ever gotten before. The sign company rented out the portable billboard and the hotel agreed to let the man put it up on their property. Hotel staffers also helped drive around the area to help look for the missing black Lab. “This is a person who really values his dog and I can appreciate that,” stated general manager of the Quality Inn, Lillian Pushor.

After being displayed for a few weeks the sign is now displaying the word ‘found’ and a thank you to those who helped reunite the dog with his owner. The hotel is happy they could help reunite the owner with his dog. “It’s a very happy ending. We’re really happy about this,” said Pushor.