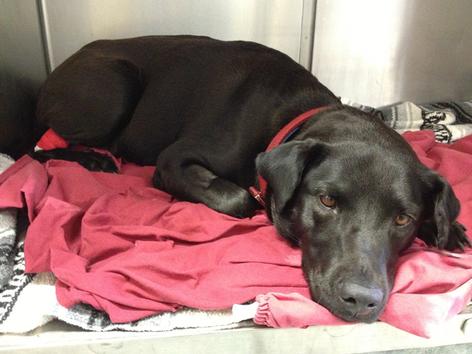 Last Friday morning a guide dog named Abbey was the victim of a hit and run. The car sped off leaving Abbey with internal injuries and vet bills that her blind owner couldn’t afford. When animal lovers in the community of Tampa Bay learned about Abbey’s condition they came together and raised the funds necessary to save her.

Abbey was in her front yard, when a car making a U-turn struck her and sped off. Her legally blind owner Terry Ellrick was distraught, “She can’t die on me. She can’t,” he said. “She’s my life.” Ellrick is blind in one eye and is going blind in his other eye. Ellrick’s friends helped him pay for initial tests, but eventually money ran out. The hit caused severe internal damage, impacting Abbey’s liver, spleen and gall bladder.  Her abdomen was also slowly filling up wither own bile and fluids, indicating there is a hole in her liver.

When Ellrick ran out of money he had to take Abbey home. He made her as comfortable as he could he believed he would have to watch her die. Then one of his friends suggested he reach out to a local news station to get Abbey the help she needed. With the help of the news station Abbey was taken to BluePearl Veterinary Partners.

After an initial exam the veterinarian believed Abbey had a 50% chance of survival. She went into surgery on Wednesday and made it through stable. It was also on Wednesday that the news broke to the community of Abbey’s condition and the need for donations to cover her care. By Thursday morning enough money was donated by dog lovers in the community to cover all of Abbey’s medical expenses. “At one point every one of BluePearl’s phone lines in Tampa were occupied with generous donors wishing to help Abbey,” James Judge, spokesperson for BluePearl stated. “Abbey is not out of the woods yet, but she is doing well and recovering from surgery.”

St. Petersburg Police are looking for the driver involved in the hit and run. They are requesting that anyone with information to call 727-893-7780. The alleged collision occurred at 5th Avenue North and 29th Street in St. Petersburg last Friday at approximately 10 a.m.