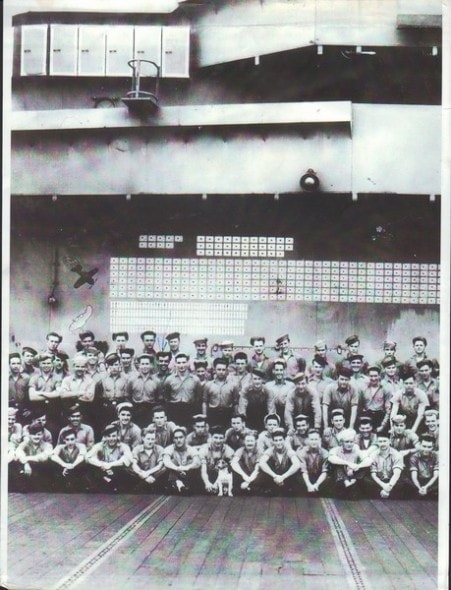 Bingo’s story is similar to many of the brave dogs that go into battle alongside soldiers in time of war.  The story tells of how one dog became one of the single most integral members of a WWII crew.  The original story was created by David Linden and posted to nypost.com by Delia Paunescu.  To read the original story, click here.

My grandfather would always tell my brothers and me about his dog Bingo, one he’d rescued on the island of Ulithi (in the western Pacific Ocean) during a stopover during WWII. We thought he was exaggerating, but he’d say how Bingo was the ship’s mascot and would follow my grandfather wherever he went aboard ship – from the mess hall to the flight deck

“Did he rescue the dog? Sure, but I didn’t really believe that the dog could have accompanied him, let alone be a ‘mascot’ for the crew of the USS Hancock. Just my grandfather telling his story in a playful way.

“Well a few years ago I was searching online for crew photos of the aircraft carrier, and I stumbled upon this one: a photo of the ordnance men on the flight deck.

“If you look carefully, you can see a little Jack Russell terrier in the front row, with a handsome man named Emanuel Rubenstein, my grandfather, right behind him, holding the dog in place. The caption of the photo reads: V-3 Division Aviation Ordnance men with ‘Bingo’ The Ship’s Mascot.”

Linden ended his post with, “Happy Veterans Day. Thank you to all who have served and continue to serve.”

In an interview with the Post, Linden said that he shared his grandfather’s history because “I wanted

[Everyone] to feel all the feels with that photo.”

The story goes that Rubenstein served as an aviation ordnance man in the navy from 1943 to 1945 aboard the USS Hancock CV-19. After the war, his grandfather “married my grandmother, settled in Queens and had tons of jobs – from selling cards to mutual funds.” He’s now 92 years old and still lives in Whitestone. “He buys a copy of the Post every day.”

“I remember him telling us the story about Bingo when I was about 6 or 7 years old,” Linden said. However, it wasn’t until college that he started looking into his grandfather’s war record. “There was a book at my college library that was all about his aircraft carrier. [That’s when] I really started looking into it.”

Once he got some of the information ready, Linden went to his grandfather who “started to tell me more about Bingo the dog, where he came from, how he was probably the best fed on the ship (the cooks loved him), and even how my grandfather taught him commands only in Yiddish.”

Linden admits finding the photo was “gratifying.” He said it was great “that my grandfather’s story wasn’t just some fairy tale.” He also admits feeling “like a dummy” that before seeing this photo, he didn’t fully believe his grandfather.

These days, Linden said Rubenstein “loves betting on football, spending time with his grandkids — and when he can, playing with my Mom’s dog.” His wife Netty passed away two years ago. They were married for 66 years and Linden called them “the picture of true love.”

Grandfather and grandson still talk about the war too. “I always try and get tidbits about his time there but like many of that generation, they don’t talk about it much. If I ask he tells. I actually just quizzed him on what his ID number and he still remembers,” Linden said.

As for what happened to Bingo, Linden heard that his grandfather brought the pup back to the States but that he was sent away to live with other dog’s when his grandmother’s allergies couldn’t handle him. “But for a bit he was a house dog. From Ulithi to NYC,” Linden said. 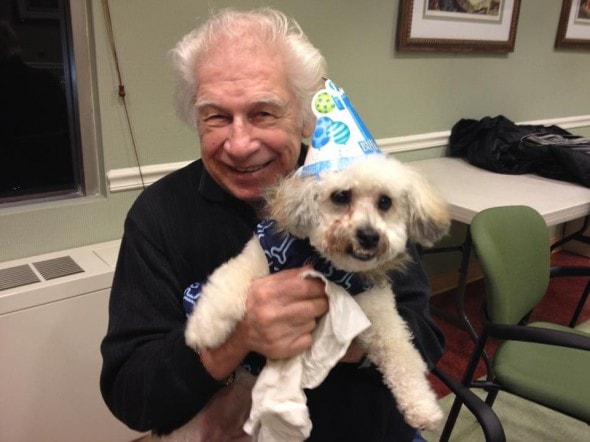