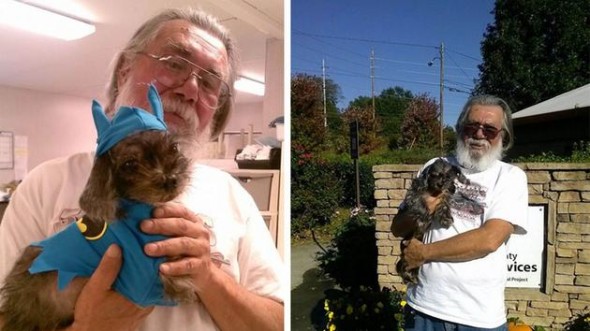 Mike Nuanes and his dog, Jordan have been separated for almost eight years, and by thousands of miles.  Even though a lot of time has past, Mike didn’t stop thinking about Jordan, and Jordan did not forget about Mike, either.

Mike and his late wife had been having breakfast in another home at the time that Jordan went missing.  It wasn’t exactly clear what had happened, but it was assumed that Jordan had become a victim of a home robbery.

After eight long and heartbreaking years however, Mike and Jordan have been reunited.  Jordan had somehow made it all the way to Atlanta.  When Mike got the call Jordan had been located, it was a dream come true.

Jordan had been picked up by a good Samaritan whom brought him to a clinic.  When it was discovered that Jordan had been chipped, it was immediately scanned, and Jordan was returned to Mike.  Mike hopped in the first plane he could get a ticket to Atlanta on, and got his Jordan back.