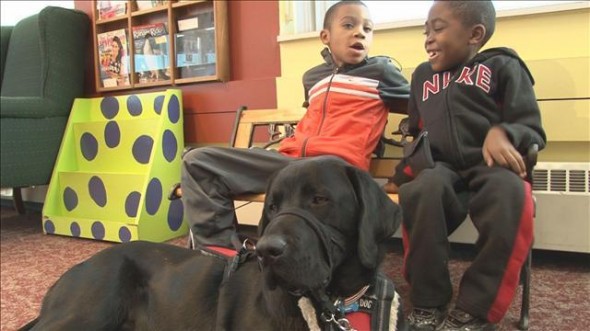 When a black lab named Pesto met Javary and Javae Howard there was an instant connection. Pesto was in training to be a guide dog though and it seemed Pesto’s friendship with the two disabled boys would be short lived, but Pesto had other ideas.

Javary and Javae first met Pesto at the Aurora Public Library. Pesto was just a puppy and his owner, a librarian, was bringing him each day for socialization.

The two boys had a similar reaction and quickly formed a special bond with Pesto. Both boys are disabled. Javary has a rare spinal disorder and has been told by doctors that he would never walk. Javae has autism and wouldn’t even speak to his family.

The Howards knew their time with Pesto would be temporary as he was training to be a guide dog. They knew he’d be able to help someone a great deal and be very successful.

During Pesto’s training he aced every exam he took, until the last day of his training. Kimistry Howard was expecting to hear about how Pesto had been placed with a great new family, but instead she got the news that Pesto had failed and would be coming back to Colorado.

“I couldn’t believe he didn’t pass,” said Howard. “I’m convinced is Pesto made a choice.”

That was two years ago, and ever since Pesto came back to Colorado he has been helping Javary and Javae. Pesto has become the Howard family’s pet, but he is much more than just that. These days when you go to the library you will find Javae reading out loud and when Javary is thirsty he walks to the water fountain himself.

“He shouldn’t be able to do a lot of things,” said Howard. “That walking should not be happening.”