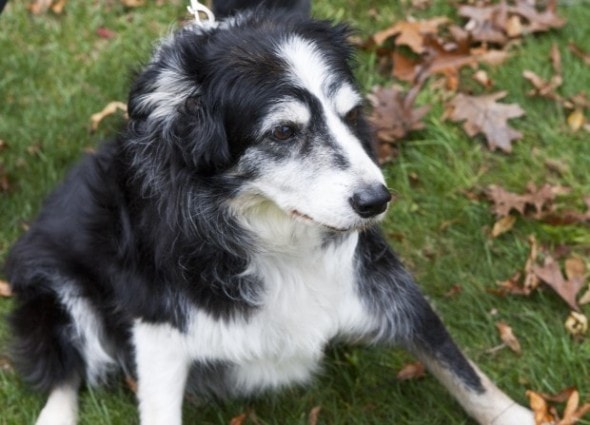 The Deming family of Cheshire, Connecticut had given up hope that they would ever see their 14-year-old border collie again when he disappeared in October.  Astoundingly, he was found and returned to them 16 days later – seemingly healthier.

Zep, short for Zeppelin, went missing on October 4.  He is nearly deaf and blind, and was only able to hobble around.  The trustworthy dog was allowed to go outside to take care of his business unaccompanied, and on that day went out the front door and did not return in his usual few minutes.  Given his age and condition, the Demings feared the worst.  They thought Zep might have known it was his time, and chose to leave this world in solitude.

Leslie and Tucker put up signs, alerted local animal shelters and had neighbors help scour the area for days, but began losing hope after 10 days with no sign of him.  They worried that in his weakened state, he might have been easy prey to coyotes.

“When my husband looked in our woods, he saw evidence of a deer that was attacked by coyotes, with bite marks along its neck,” Leslie said.  “I was sick because I thought Zep had gotten eaten.”

At the very least, the couple wanted to at least know what became of their beloved Zep so they could have closure.  What they got was even better.  Pixie and Mark Nellis live nearly a mile from the Demings, and 16 days after he vanished, Zep just appeared in their yard.

More strangely, he showed up healthier, albeit “tick-infested and smelling like a feral dog,” according to Tucker.

“He lost three pounds, and when he left he was already half alive and half dead,” Tucker explained.  “He came back and he was actually sprightlier.  I don’t have an answer for it.”

The Demings expressed tremendous appreciation for the Nellises, as well as their neighbors Tom Gosezewski and Brian Klanica in their efforts to locate their dog.  Brian spent nearly an hour every night Zep was gone searching the woods for him.  With their grown children out of the house, the Demings are especially glad to have their buddy back home.

“He’s been a really great dog all these years,” Leslie said.  “It’s just so special.”