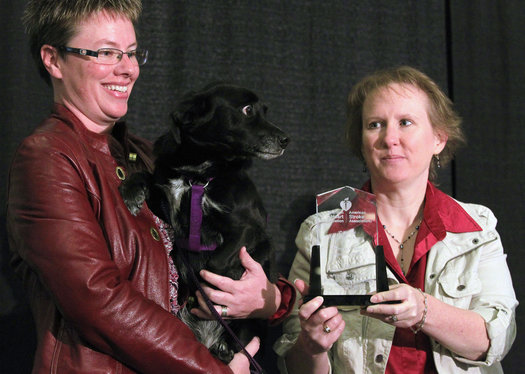 Kansas City resident Paula Perone was suffering from a migraine and just wanted to sleep, but her dog Sadie tugged on her nightgown until she got up.  The six-year-old blue heeler/Daschund mix whined, trembled and persisted in getting to Perone’s head.  The sensitive dog did everything to help her owner realize she was having a stroke.

“If it wasn’t for her, I could have easily just gone to sleep and never woken up,” Perone said.  “By the time they performed surgery on me, I had already hemorrhaged.  I already had bleeding on the brain.”

Perone had been suffering from headaches for a couple months.  She had been to the doctor, and even had MRIs performed to find the problem.  On June 14, she took the day off from work because she still wasn’t feeling well.  She was lying down on her bed when Sadie began pestering her.  Perone moved to the couch, where Sadie continued her efforts.

“She’s a pretty calm dog, but she would jump on the couch pillows and get whatever it took to get to my head,” Perone explained.

Irritated with Sadie’s unusual behavior, Perone tried to push her dog away from her.  That’s when her arm gave out, and she realized the danger she was in.  She called her partner, Michelle Tucker, who rushed her to St. Joseph Medical Center.  She was taken to St. Luke’s Hospital for surgery.

Sadie was given a special honor Friday at the 15th Annual Stroke Symposium presented by the American Heart Association and the American Stroke Association.  She was nominated by Kathleen Henderson, the stroke program coordinator at St. Joseph.

“I still get goose bumps when I tell this story,” Henderson said.  “If it hadn’t been for Paula’s dog Sadie, she probably wouldn’t have come to the hospital.  And if she hadn’t come to the hospital, she likely would’ve been very disabled or possibly dead.”

Sadie was rescued from Wayside Waifs in 2007.

“We just connected,” Perone said.  “I know that sounds silly, but she seemed like the right dog for me.”

Since they met, Perone knew there was a special connection, and it was that connection which saved her life.  She is still recovering, but hopes to be back at 100 percent soon.  She finds it incredible that the dog she saved, ended up saving her.

To explain it she simply says, “Never underestimate the loyalty of a best friend.”

Know how to recognize a stroke – remember FAST!

Face – smile.  A stroke can cause one side of the face to droop.  Sudden headaches and dimming of vision may occur.

Arms – raise both arms.  One may be lower than the other.

Speech – there may be slurring and difficulty speaking or understanding

Time – every second counts.  The sooner treated, the more likely there will be recovery.