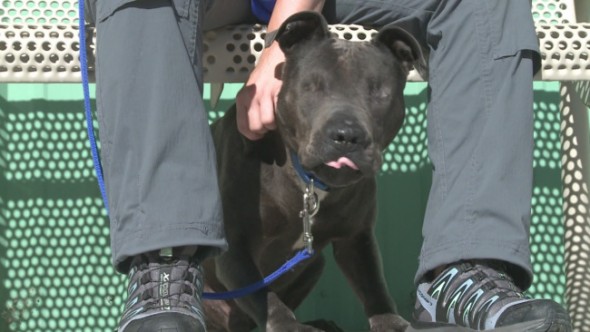 After spending most of his life chained up with nowhere to run, Raj now has a forever home with a loving family.  He spent months in a shelter after being rescued, and couldn’t be happier to be going to a family.

“As I saw him, I just knew he was my puppy,” said Alex Goslow.

Raj is four years old, and life hasn’t always been very easy for him.  Estimates say that he had spent three years chained up in a Las Vegas, New Mexico yard.  He was living with two other dogs, but Raj was the only one to survive.  The other two dogs are believed to have been poisoned.

He had his story featured on popular website thedodo.com, and also in the UK.  For whatever reason, finding a forever home for Raj was taking forever.  Until recently that is.

“When I saw him and just the video and how he behaved and how happy he was despite any vision it seemed like really good fit,” said Raj’s new human mom Alex Goslow.  “The next day we decided to go to Animal Humane and we picked him up.”

Raj is settling in to his new home nicely.  He enjoys running free and unchained in the backyard, and when he’s not doing that, he really enjoys some cuddle time with his new humans.

“I think the world is a better place with Raj in it, so I am glad we could provide that for him,” she said.