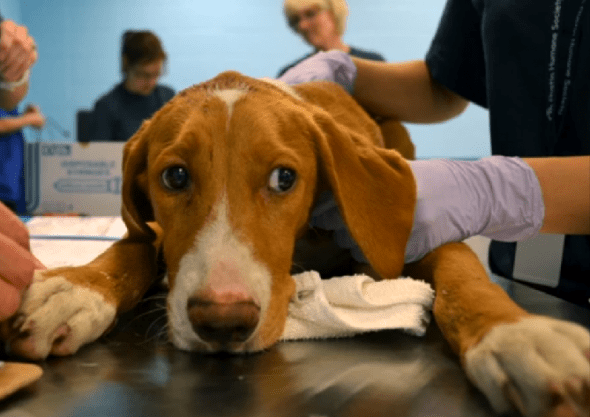 Danny is a 5-month-old puppy that was rescued with 29 other dogs from a farm in Texas. Danny is different from other puppies though, he has juvenile cataracts. Danny will be undergoing surgery this week to correct his vision.

When Danny walks into a room the first thing that most people notice is that he acts different than most puppies.  He proceeds with caution, carefully sniffing before moving forward. When Danny was rescued from a hoarding situation he was brought to the Austin Humane Society where they discovered he had juvenile cataracts.

“I think it really is affecting him. He’s a lot more withdrawn, “said Austin veterinary ophthalmologist Dr. Lynsey Wagner. “He doesn’t see you to be able to interact with you. He probably just sees light and dark at this point, like looking through a very frosted shower glass door.”

Dr. Wagner will be performing a surgery that normally costs $4,000 for free to help Danny see again. Danny had to undergo a series of test to make sure his eyes were healthy enough that they’d be able to see once the cataracts were removed. He underwent those procedures on Monday and he received the all clear to undergo the surgery this Thursday.

Anyone wishing to contribute to the cost of Danny’s post-surgery medical care visit this website.