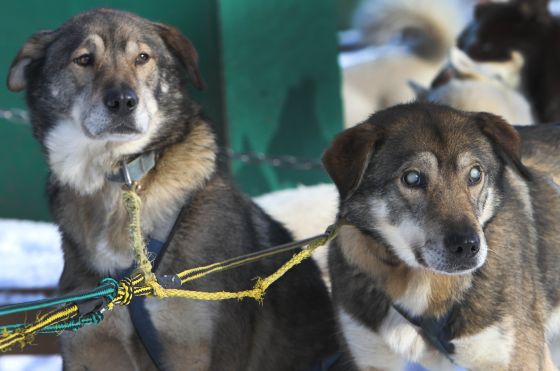 Three years ago Gonzo started tripping over his food bowl. He was going blind and no one could explain why. The sled dog didn’t let his blindness slow him down and with the help of his brother Poncho continues to run.

When Gonzo first started going blind his brother Poncho didn’t treat him any different. Then Poncho realized his brother needed help and the two started working together in a unique way. “At first, he’d be a little bit nervous when Gonzo would lean into him. And then somehow – I don’t know how dogs communicate – he learned that he was utilizing him to determine where the turns are and how fast they were going,” said Karen Tolin of Muddy Paws Sled Dog Kennel. “And he would let him do that – he wouldn’t get as grumbly as he did in the beginning.”

Poncho even went above and beyond when Gonzo struggled on runs, demonstrating just what special bond they have. One spring day while out for a ride on a trail with deep snow Gonzo strayed too close to the edge of the trail and fell. Typically if a dog trips the others just keep going, but this time Poncho didn’t keep going. Instead he reached over to where Gonzo was and pulled his brother out of the snow by grabbing his harness with his teeth. “He essentially picked him out of the powder…threw him back on the trail and never skipped a beat,” said kennel owner Neil Beaulieu. “I’ve run goes in a lot of places, all over the country and it was the most amazing thing I’ve ever seen sled dogs do.”

Gonzo hasn’t treated his blindness like an obstacle and the Muddy Paws kennel doesn’t either. “Even though he’s blind, he still knows when hook-ups are happening. He’s still very aware,” said kennel manager Ben Morehouse. “When you have a dog such as Gonzo, with such a want and drive and a desire…you try it, you hook up, you see what happens.” Gonzo utilizes his other sense to help him keep up. While all the other dogs look straight ahead on a run, Gonzo will lift his head up and to the right to utilize his hearing and sense of smell.

Gonzo isn’t the only sled dog in need Beaulieu and Muddy Paws has helped. When Beaulieu was living in Alaska 10 years ago he was volunteering to help out with the Iditarod dog sled race. Muddy Paws runs sled tours from Mount Washington Hotel in Bretton Woods, New Hampshire. Beaulieu’s main focus though has become finding good homes for dogs that might otherwise be killed. Money from the tours helps find sled dogs that would otherwise be put down find homes. “A lot of shelters deem sled dogs unadoptable, and they put them down,” said Beaulieu. “For myself and the entire crew here, we know that’s false. They are very adoptable.”

The kennel works to find sled dogs active families and offers training, along with phone and e-mail support to those willing to take on a sled dog. While some of the dogs at the kennel, like Gonzo and Poncho, are born there. The kennel takes in a lot of “second-chance” dogs, former professional sled dogs that are past their prime and dogs that are rescued from bad situations. For more information on Muddy Paws Sled Dog Kennel visit their website.