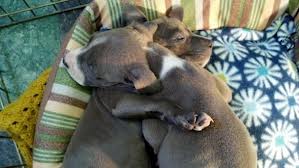 The puppies that were abused and left to die on the train tracks have become well known, but until know the perpetrator of the terrible act was a mystery.  On January 14th police arrested Anthony Walker of Albany.  He was charged with one count of abandonment of a disabled animal, which is a misdemeanor.

The three, three week old puppies were found on railroad tracks with horrible, deliberate injuries to their paws. One was missing a paw, another was missing 2 toes, and the third had a hole in his paw, possibly from having a nail driven through it.  Sadly, one of the puppies did not survive, but the other 2 have recovered from their injuries and are now living in happy homes. One of the pups is cheerily running around on a new prosthetic leg.

“I had my doubts about catching someone. When you just find on an abandoned stretch or railroad track on a road that isn’t well traveled, it seems to me like the chances of finding someone were pretty slim, that’s why I was so surprised and impressed that someone was actually found,” said Brad Shear, Mohawk Hudson Humane Society Executive Director.

So now the pups have moved on and with the arrest there is some closure for everyone, especially the railroad worker who initially found the pups and their lives.