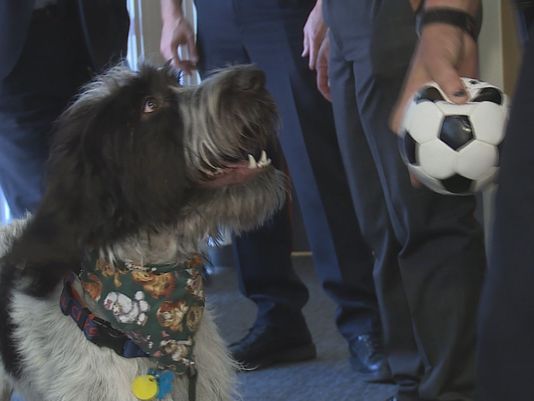 The Boise Police Department has a new mascot.  The goal of bringing the dog in is to hopefully strengthen police/community relations.  Something the police department believes will make things safer for residents and officers alike.

Police Chief William Bones said, “His main job really is out there in the public making connections, breaking down barriers and being just that friendly face of the police department.  “You know officers often run into people in those worst moments of their lives and that can be really, really tough, so one of the roles he’ll also fill is being a therapy animal, just being there for somebody when they’ve gone through that tragedy, sometimes that can make somebody feel that much better.”

The department started in the beginning of summer looking for a special dog to bring in.  They needed a dog with the right temperament, and people skills, with good socialization.

The department met what they believed to be just the right dog for the job.  He was brought in as a stray and not claimed.  They didn’t know everything about the dog’s past, but after meeting him, they just knew.

Now, the police department is asking for help in naming the new mascot.  They’ve set up an email address that the community can use to send in suggestions on what they should name him.  It’s only open to students in the City of Boise School System grades K through 8.  It runs through 9-22-2015.