They say that everything happens for a reason, and that’s certainly true for the Reyes family of Pinecrest, Florida.  Only two days after adopting Candi, the year-old terrier mix puppy rescued them right back by alerting them to toxic smoke that otherwise would have killed them in their sleep.

Candi was adopted during an adoption event held by Miami-Dade Animal Services over the weekend, and the timing couldn’t have been better.  She was adjusting to life with her new family, who she was clearly happy to be a part of.

On Monday night, Silvia Reyes, her husband, and their 13-year-old son Marcus were sleeping when Candi startled them awake.

“We heard a lot of barking and howling,” Silvia explained to Local 10 News.  “To my surprise, at one in the morning, I came down and our kitchen was engulfed in smoke. 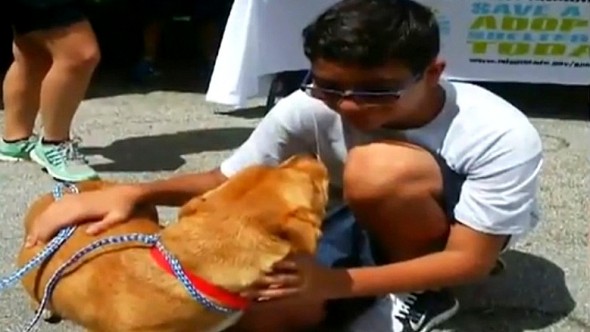 She woke up her husband and called 911.  The refrigerator’s compressor had blown and smoke was seeping out from behind it.  The family was able to make it out safely.

“She rescued us, she saved our lives,” Silvia said.  “We were sleeping… we wouldn’t have known, otherwise.”

Little Candi wasn’t as fortunate.  Being in the kitchen, she inhaled a lot of smoke, causing her to become quite ill.

The Reyeses brought her to an animal hospital, where an X-ray revealed that one of her lungs had collapsed.  She was put on an IV and given medication, and is expected to make a complete recovery.

“You’re taking someone from a shelter, you’re thinking you’re helping them, you’re rescuing them.  She’s part of our family… it was meant to be.”