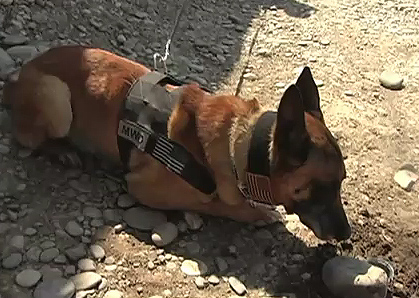 HERAT, Afghanistan– An explosives detection dog with the Red Platoon, Bulldog Troop has been wounded in the war against terror, earning an early retirement and drawing praise for saving human lives in the heat of battle.

“Not all dogs are cut out to be patrol dogs. He was hand selected in Germany,” said Petty Officer 3rd Class Ryan Lee, Valdo’s handler. Red Platoon came under a sustained attack on April 3rd, and Valdo was injured by a rocket propelled grenade when it breached Red Platoon’s fighting position and landed directly behind him. Valdo absorbed most of the grenade’s shrapnel, likely saving the lives of the soldiers who surrounded him at the time of the attack.

While Valdo was seriously injured in the blast, he is expected to recover, and his handler is hoping to adopt him when he is healed. “You get pretty close to the dogs,” said Lee. “[Valdo and I] are always together. We live in the same tent, eat at the same times, and don’t really have much, so make do with what we’ve got.”