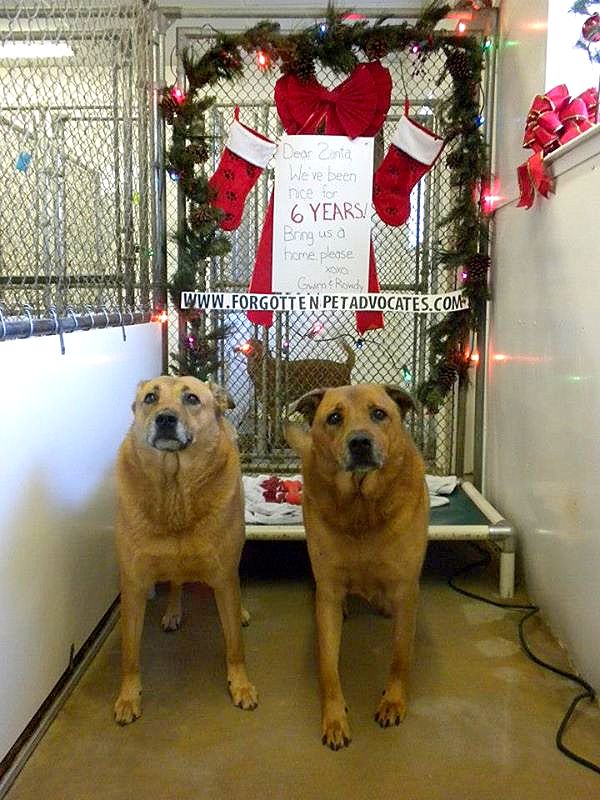 Rowdy and Gwinn have spent their entire lives – eight years – in a shelter.  The pair have grown to know little other than their kennel run and the love they have for each other.  But it’s a Christmas miracle – these two have found a home together at last!

“Gwinn and Rowdy were born in Oct. 2006. They have spent their whole lives in a boarding kennel, not a shelter, but a place of business. The kennel owner reached out to the founder of FPA, asking for help in finding good homes for not only Gwinn and Rowdy, but many other dogs and cats that had been abandoned or dumped (not only by individuals – but animal rescue groups as well) at her establishment. That is when The Forgotten Pet Advocates was formed…to serve a need many did not know existed, not only here, but all over the US.”

The boys have been staying at The Forgotten Pet Advocates.  Though they get attention from staff, what they really needed was a home.  It was difficult to find them a place because they’re rather large, and most adopters aren’t looking for two big dogs at once.

There was hope last year when someone who lived five hours away took them home for a trial sleepover.  It is a slow process to introduce dogs who have been boarded for so long into a proper home.  Gwinn and Rowdy have become institutionalized, so a potential adopter must visit them several times and bring them home overnight to test the waters.  Alas, the adoption for the boys fell through, and they spent another year in boarding.

However, hope has been renewed by a new family.

“Gwinn and Rowdy are currently pending adoption TOGETHER! The potential adopter has filled out the application, has been approved and now is going through the necessary steps to make this a successful adoption,” Forgotten Pet said in their Facebook post.

“Our estimated ‘official’ adoption date is 14 Feb 2015. She is currently visiting them weekly, and will, with the kennel owner’s help, take them home for a few hours a couple of times prior to the adoption date. She understands this is a slow process, given that Gwinn and Rowdy have known nothing else.

We have to install a doggie door, proper fencing and hire a professional trainer to ensure they can acclimate to their new environment.
For all those through the years that have offered to donate towards training, transport, adoption fees, whatever, to get them into a home – we have never asked before – we are asking now.”