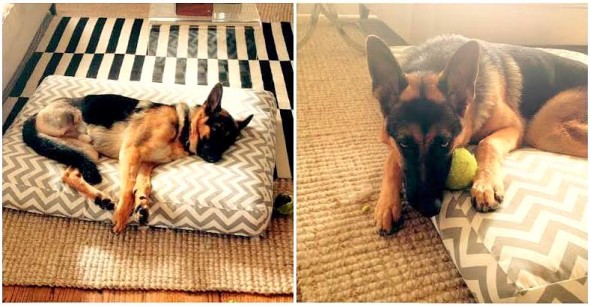 Last month we told you about a 10-month-old puppy whose leg became so tangled in a chain that he chewed off his foot.  After undergoing medical treatment, he has now been adopted by his foster family.

Rocky was saved by Coastal German Shepherd Rescue OC in California after being surrendered to a county shelter.  He was missing his right hind foot, and it was determined that he had chewed it off after it became painfully ensnared in the chain with which he had been tethered.

His former owners claim they had “no idea” what happened, but animal lovers didn’t buy it.  Vets could see ligature marks on Rocky’s leg in addition to a severe infection.  His leg needed to be amputated, and it wouldn’t be cheap.

“The estimate for the full amputation surgery is approximately $2,500. We not only need to raise the funds for his surgery and care, but we also need to find a foster or forever home for Rocky as well,” the rescue group said.  “He will need a loving and supportive home to recover and heal in. In spite of the pain and horror of his injuries, Rocky is a sweet and happy boy, grateful for the love and kindness that he is being shown.”

Enough money was raised to get Rocky the amputation, and he was taken in by a wonderful foster family.  They fell in love with the sweet boy and adopted him earlier this month.

“We will most likely be naming him Aron Ralston… we will call him Rally for short,” his family said.

Ralston is the man who survived the canyoneering accident in which he became trapped by a boulder for 127 hours and was forced to cut off his own arm.  Like Ralston, Rally is a true survivor, and deserves every bit of love and happiness he will now get.