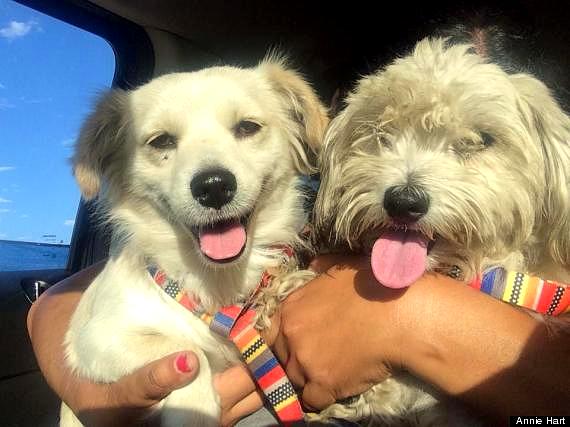 Well-known animal rescuer Annie Hart’s group Rescue from the Hart got a call earlier this month about two dogs seen wandering the streets of East LA.  Neighbors couldn’t get close enough to help.

The dogs seemed to take food easily enough, but they were too skittish to get close enough to touch.  It was clear that the female was the more timid of the two, so a trap was set to catch her.  It took a few tries, but finally she got in the crate.

She was really hungry, and didn’t even mind being caught.  Her male friend was much easier to catch – he didn’t want to be left behind!

Once inside the car, they were full of smooches and smiles.  On the ride to Hands, Paws & Hearts Rescue, the pair were named Monica and Chandler after the couple on Friends.

“Chandler is very dependent on Monica and takes his cues from her,” Hart told The Huffington Post. “As soon as he saw that she was in the trap, he came over to make sure she was okay and that we weren’t going to hurt her. And seeing that this was the case, he quickly offered himself up to be rescued as well. He really did want to make sure he got to go wherever she was going.” 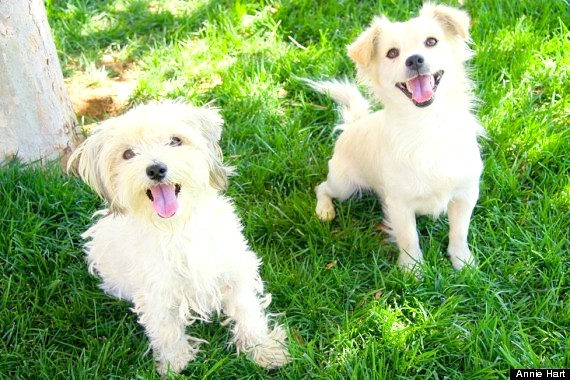 The cuties had severe flea and tick infestations when they were found, and also suffered from giardia.  Now they’re healthy, happy, and in a foster home.

“Both pups are doing amazingly well now, considering how nervous they were on the streets,” Hart said. “It never ceases to amaze me how resilient dogs are and their capacity to let go of the past and embrace a second chance.”

Chandler and Monica amaze everyone they meet with their close bond, and rescuers are working hard to find them a home together.

“Monica adores having Chandler constantly by her side and looking out for her. And Chandler takes this job quite seriously, even doing his best to entertain Monica and make sure she’s having fun,” Hart said.  “Neither one likes being separated from the other for more than a few minutes, and seeing how healthy of a love they have for each other, we agree they need to be adopted together.”

If you would like to adopt them, visit Hands, Paws & Hearts or Rescue from the Hart.