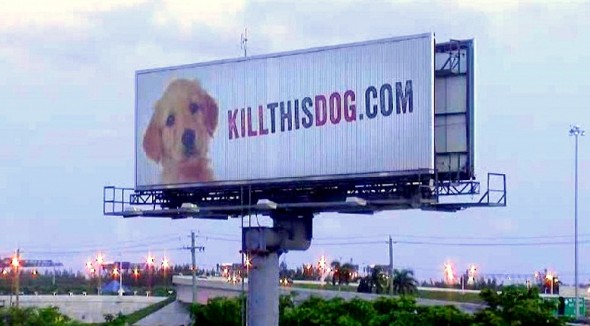 Animal advocacy group Pets’ Broward has erected a billboard over a highway near the Fort Lauderdale-Hollywood International Airport with a cute puppy and the startling caption KILLTHISDOG.COM.  They created the controversial campaign in an effort to minimize the number of adoptable dogs and cats being euthanized in the Florida county each year.

The website asks viewers “Should we kill this dog?”  If you click “Kill,” you’re informed that about 20,000 shelter animals are killed by two Broward County shelters each year, and that the budget had increased by 24 percent in 2014. Each euthanasia is estimated to cost taxpayers $223, so why is more not being done to help find homes instead?

In 2012, Broward County passed a formal resolution to reduce the number of animals being euthanized at county shelters, which had a rate of over 50 percent.  The goal is to make them no-kill shelters, which only euthanize animals that are very severely injured or too traumatized to ever be safe as family pets.

But little has been done to change the current policy of killing animals that have only been at shelters for a few days.  County commissioners refused to even conduct a public poll asking voters if they would support a tax increase to fund no-kill shelters. 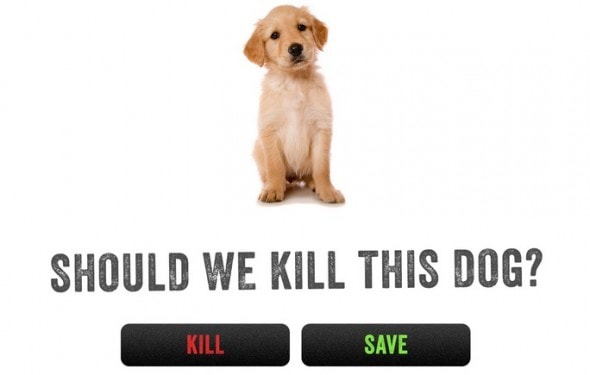 More of an effort needs to be made to find homes for shelter animals, and there needs to be a better spay and neuter program.  Perhaps a mobile unit could drive around neighborhoods offering free or low-cost spaying and neutering.  A trap, neuter, and release program could be initiated for feral cats.

“I’m a longtime animal lover.  It’s in my blood,” said Pets’ Broward founder Meredith Bruder.  “And Broward wasn’t doing anything proactive.  Everything they do is reactive:  we take in animals and we can’t keep up, so we kill them.”

That’s when the website and the sign went up.  Bruder has been contacted by people saying they are “offended” by the shocking billboard.  As Stephen Fry would say to someone claiming to be offended, “Well so f—ing what?”

“The point of the billboard is to raise awareness,” Bruder said.  “Most people don’t have any idea that thousands of animals are being euthanized every year.”

To help save the lives of unwanted animals, please click here. 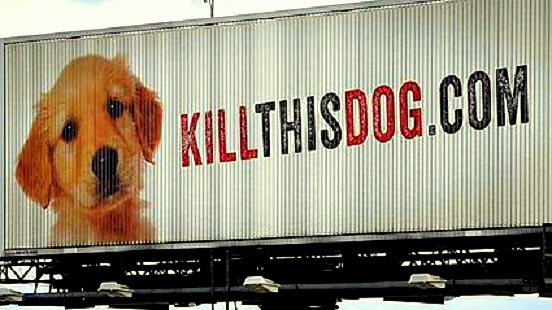