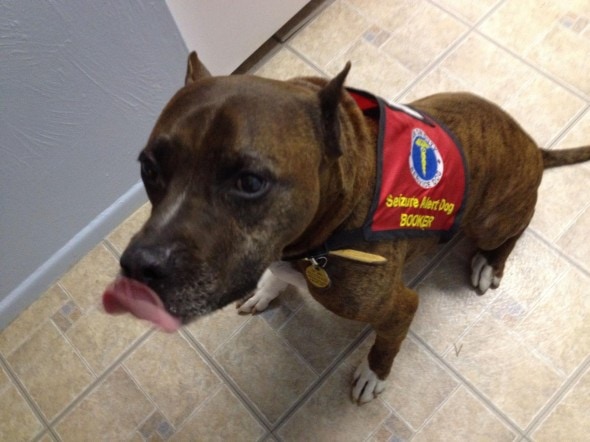 Booker is trying his best to change the way the world looks at Pit Bulls.  After being seized in a drug bust in 2010, Booker was sent to a shelter and was in danger of being euthanized because he was thought to be aggressive.  Nothing could be further from the truth, and fortunately someone who worked at the shelter saw that Booker was not dangerous and gave him a reprieve.

He was sent to Adopt-a-Bull, a rescue for pit bulls, where he spent several months with a foster family, getting used to being around other dogs, and being loved.  Booker was adopted after about 4 months by a kind and compassionate woman.  She took time to socialize him, and they went to doggy school, and together they discovered that Booker was kind and gentle and he got over his fears to become a wonderful part of her family, which includes cats and children.

Then after some time, Booker’s real talents became evident.  Bookers “mom” began to have seizures, and he was smart enough to sense them coming and try to warn her by licking her incessantly, which at first she did not understand.  Eventually though, she realized he was trying to help her and together they went back to school where Booker became a service dog.  He now accompanies his mom everywhere, proudly wearing his vest.

Because of him, his owner can continue to drive a car, as Booker can warn her of a seizure giving her time to pull over.  He has given her the precious gift of freedom to go about her life as normally as possible.  In addition Booker serves as a Pit N Proud ambass-a-dog and attends events in the hopes of helping people see that Pit Bulls can be wonderful companions.

Now Booker and his mom desperately need your help.  Booker has been diagnosed with laryngeal paralysis which means his larynx does not open all the way and therefore he can not breathe correctly. He is confined to the house and now on tramadol to keep him calm. Surgery is his only option and is costly.  His mom is doing everything she can to raise money for his care but needs more help and says “He would never give up on me, and I will never give up on him.” If you can help to save Booker who has given so  much, please email   [email protected] or call or text 520-907-2523 to find out how you can help.