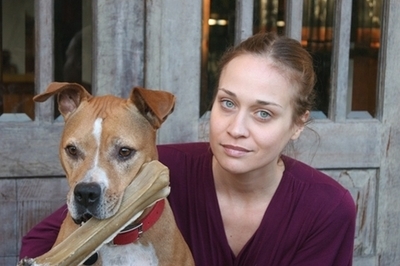 On Tuesday singer Fiona Apple announced she is postponing the rest of her tour in South America. The sole reason for her tour cancellation is to spend time with her dying dog Janet.

Fiona recently finished up her North American leg of her tour and was set to start touring South America when her pit bull Janet’s health took a turn for the worse. On Tuesday she posted a hand written letter to her Facebook page explaining the reason for her cancelling her tour. The heartfelt letter explained the long and loving relationship between Janet and Fiona.

Janet was found in Echo Park with a rope around her neck and bites all over her. At four months old she came into Fiona’s life and they have spent the past 13 years together. “Janet has been the most consistent relationship in my adult life, and that is just a fact,” stated Fiona. Fiona describes how Janet has been there for her through heartbreaks and by her side as she creates her music. “She’s my best friend and my mother and my daughter, my benefactor, and she’s the one who taught me what love is,” Fiona wrote to her fans.

For the past two years Janet has been sick with a tumor in her chest. Janet also suffers from Addison ’s disease which makes it difficult for her to travel. The disease requires her to take regular injections of Cortisol. When Fiona returned from her most recent leg of her tour she noticed a change in her best friend. “She doesn’t even want to go for walks anymore.” That’s when she decided she needed to stay by Janet’s side.

Fiona wants to be there to comfort Janet in her final days. “I will not be the woman who puts her career ahead of love and friendship.” The singer asks her fans to understand, “I just can’t leave her now…If I go away again, I’m afraid she’ll die and I won’t have the honor of singing her to sleep, of escorting her out.”

Fiona’s letter to her fans can be read here.