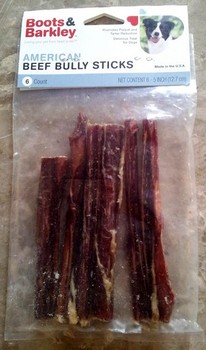 There have been many recent reports of tainted dog treats floating around, namely Chinese-manufactured chicken jerky strips, but the FDA has been investigating and has issued a recall on one brand of treats – Boots and Barkley.

Kasel Associated Industries of Denver, CO, is voluntarily recalling its Boots and Barkley American beef bully sticks due to possible Salmonella contamination.  None of their other products have been recalled.

The treats come in a clear plastic package of six, and were distributed at Target stores from April through September 2012.  The barcode on the packaging is 647263899189.  All have been recalled because the State of Colorado Department of Agriculture found samples testing positive for Salmonella on the following lot codes:  BESTBY20APR2014DEN, BESTBY01JUN2014DEN, BESTBY23JUN2014DEN, and BESTBY23SEP2014DEN.

No illnesses in connection with the bully sticks have yet been reported.  Kasel and the FDA continue to investigate the source of the contamination.

Consumers are encouraged to return the product to Target for a full refund, and to direct inquiries to Kasel Associated Industries at 1-800-218-4417 Monday through Friday from 7am to 5pm MDT.