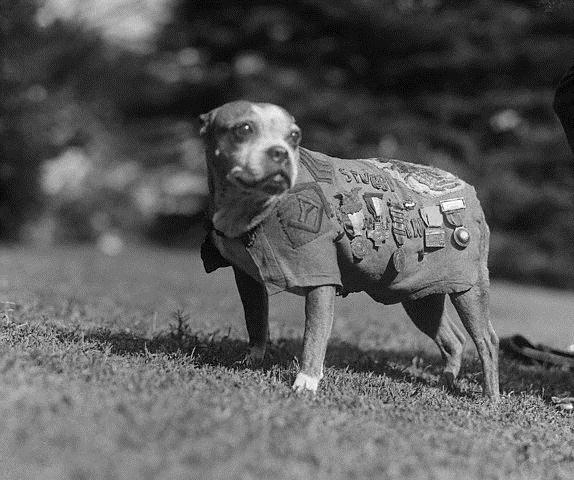 Stubby, a pit bull type dog, was a hero of World War I. He is the only dog that has been promoted to Sergeant through combat. He served for 18 months in World War I as part of the 102nd infantry, 26th Division in France. Involved in 17 battles, Stubby did more than just boost the morale of the soldiers in his unit. He was adept at locating wounded soldiers, learned to warn his unit of poison gas attacks and is even responsible for capturing a German spy.

Stubby became part of the army when he one day showed up at Yale Field in New Haven, Connecticut. A group of soldiers were training there and one in particular developed a liking for Stubby. Corporal Robert Conroy hid Stubby on board when it was time to ship out. After serving his 18 months in France, Corporal Conroy smuggled Stubby back home to the United States where he became a celebrity.

Upon his return to the United States, Stubby led parades and met presidents. General John Pershing awarded Stubby a special gold medal for service to his country. He was made a life member of the American Legion, the Red Cross and the YMCA. When Corporal Conroy started at Georgetown Law, Stubby came along and became the Georgetown Hoyas’ mascot. Stubby passed away in 1926 at the age of 9 or 10. His remains are featured at the Smithsonian in the Price of Freedom: Americans at War exhibit and he is also honored with a brick at the United States World War I monument. Today Stubby helps fight the misconception of pit bull type dogs with his story.