Sheep dogs are known for keeping sheep in line and out of trouble, but a Border Collie from Uruguay became a heroic sheep dog when the working dog helped bring back to life a newborn lamb. 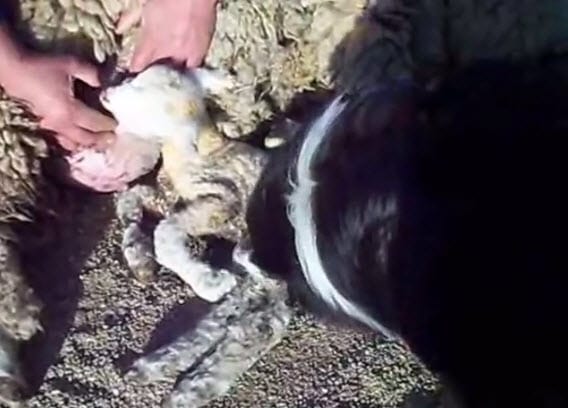 Felipe Germán is a humble sheep keeper from Goñi, Uruguay. On July 15, 2015, Germán checked on his sheep early in the morning just to make sure they were well. The sheepherder had a few pregnant sheep and wanted to make sure they had not given birth over night. To his surprise one of the pregnant sheep delivered twin lambs but unfortunately one of the babies had died shortly after birth.

It was unusually cold that morning, Germán picked up the other lamb and brought it inside his home to keep warm next to his wooden stove. The baby lamb was very cold and stiff and the sheep keeper feared this lamb would die just like his twin brother.

As the lamb lay near the heat of the wooden stove, Dino, the two-year-old sheep dog, came close to the cold and lifeless baby. Immediately, the dog licked the newborn lamb stimulating blood flow and helping it come back to life.

A few hours later, the lamb was healthy and strong enough to stand and drink his mother milk all on his own.

Felipe says he and Dino have fallen for the lamb and they are not planning on selling or killing the miracle baby. The lamb will die from old age after enjoying a wonderful life next to the sheep keeper and his sheep dog.