In A Coruña, Spain, concerned animal lovers feared that a dog walking along a building’s slanted roof top would lose its balance and fall to his own death. Luckily the dog’s owner was made aware of the precarious situation and helped bring the pet back to safer ground.

The naughty dog was home alone at the time of the incident, and through a back window, the pet was able to exit the residence and access the rooftop. 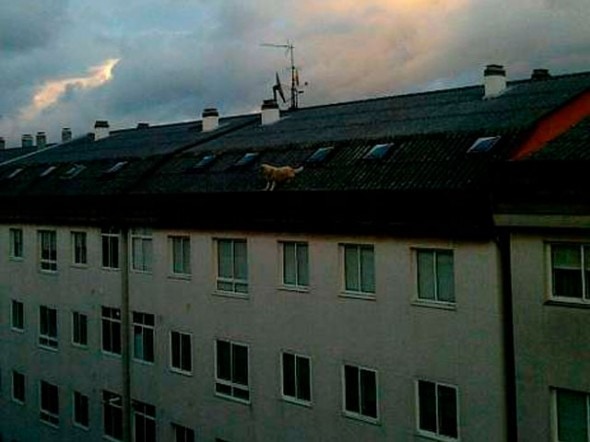 When neighbors spotted the dog, they rushed to the dog’s side. They tried coaxing the dog back to safety, but the canine paid no attention to them and continued to walk along the roof.

While the concerned animal lovers kept a close eye on the pet, other neighbors contacted the pet owner and informed him of his pet’s whereabouts. Immediately, the pet owner returned home and saved his dog’s life.

All the pet owner had to do was call his dog’s name from inside the apartment, and when the dog heard a familiar voice, the pet went back inside through the same window he used to access the rooftop.

For the neighbors, it was a tense and scary situation, but they were glad to see the dog back inside and out of harm’s way.