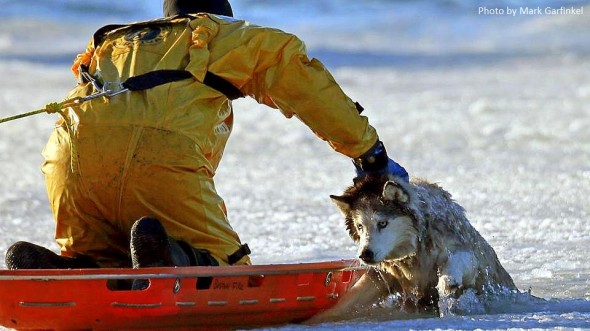 It’s winter, and sadly there are too many stories of dogs succumbing to the dangerously low temperatures either through mishap or owner neglect. But and while these stories can oftentimes be too much to bear, it is always worth bringing to light a hero that has saved the life of one of our companions.

Boston firefighter Sean Coyle came to the rescue this morning when he pulled a 13-year-old husky named Sylvie from the brink of death after she fell into 20-degree water.

Sylvie and her owner had been walking along the Boston Harbor when she plunged through the ice near Castle Island. Her owner immediately called 911, and seven-year veteran of Ladder 19 answered the call.

Coyle, wearing a survival suit, slid out on the ice in a stokes basket.

“As I got closer, I could see the ice was encapsulating him,” Coyle said. “He was frozen and real scared, I’d say he had less than half an hour left.”

A human wouldn’t have lasted more than 10 minutes. Sylvie had already been treading the 20-degree water for half an hour.

Coyle’s outstretched arm was met by a receptive Sylvie, ever so grateful to have her rescuer’s help. He managed to pull her from the icy water, but needed a rescue for himself when he fell in. He had been judiciously attached to a rope, and was able to be pulled to shore by fellow firefighters.

Both he and Sylvie were gradually warmed up and recovered.

This was the second time Coyle had saved a dog from the water. His first rescue was of a dog stuck below the rocks on Pleasure Bay. He says a life is a life, be it two- or four-legged.

“We look at the pets like citizens,” he said. “They’re loved by their owners and we want to make sure, whether it’s in a burning building or a freezing lake, we just want to get them out safe.”