Twenty dollars may not sound like much, but it was every penny a young Missouri boy had saved.

KAIT-Jonesboro, AR-News, weather, sports, classifieds
Young Hayden Sando of Kennett, MO was on his way to church when he spied an injured puppy lying helplessly by the side of the road. Others were driving by, but Hayden and his mother asked an off-duty police officer at their church to help. He contacted the Kennett Humane Dept., and the wounded Great Pyrenees was transported to KenMo Veterinary Clinic for treatment.

Said Hayden, “she looked really bad at first”, but this 14 week old pup was lucky; she had a broken leg and other very treatable issues. Hayden showed up the next day after emptying his piggy bank and offered it to help pay for the puppy’s care. He named her Slicer after the street where he found her in need of a good Samaritan.

Kennett Humane Officer Tina Petix commented that, “usually kids don’t empty out their life savings to donate for an animal”. Hayden has visited Slicer several times, and says that it made him feel good to help Slicer. “He will just sit there and play with him and they both have a great time,” Petix said.

“She’s doing better. She can walk now,” said Hayden. “It makes me feel a lot better that she’s alright.”
“I was very proud that he had the, took the initiative to make a difference,” said Shawn Sando, Hayden’s dad. “I know sometimes we think, well, it’s just an animal, it’s just a dog, but it was a vulnerable creature who was needing some help and I was glad that Hayden had the willingness to step up and do something.”

Thank you Hayden, for your kind heart. 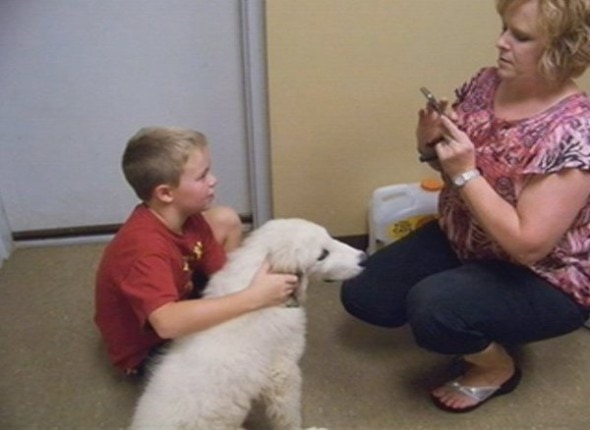