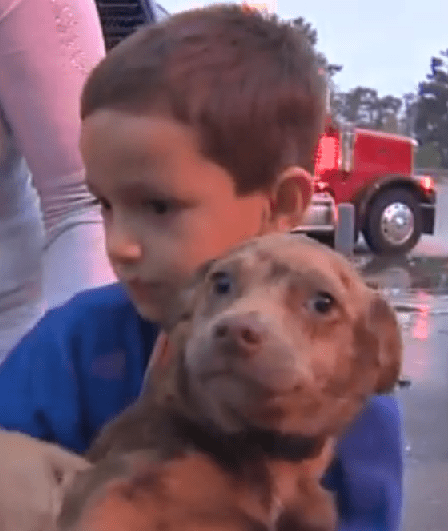 A six-year-old boy was thankfully reunited with his puppy one day after the two were involved in a serious car accident.

Navy Lopez and her 6-year-old son Damian Ortiz were involved in a massive pile-up car wreck that occurred on Thanksgiving. The pile-up involved more than 100 vehicles on I-10 near Beaumont, Texas. Lopez and her son were luckily able to walk away from the wreckage unharmed, but their 3-month-old puppy Bo ran away. “I looked everywhere for him and couldn’t find him,” said Lopez. Damian was devastated by the loss of his puppy.

Blake Jones, a tow truck driver, was helping to clean up the massive wreck when he spotted Bo. “He shows up out of nowhere, first time I’d seen him all day. At first, I thought he was just wandering around. Then, I got to thinking. He was way too friendly,” Jones said.  He instantly was bonded to the puppy but had a feeling the puppy had an owner. So along with his girlfriend he took photos of Bo and posted them online.

Word of a little boy who had lost his puppy had already become well known across the region and country. Damian’s story became well known after he convinced his mother to share the turkey dinner they had in their car with other crash victims. When the photos appeared online of Bo he was quickly connected with Damian.

Damian’s mom was able to get in contact with Jones and they arranged to meet on Friday to reunite Bo and Damian. “This is a great Thanksgiving blessing for him to be able to get his dog back after such a tragic and scary day,” said Jones’ girlfriend Jesi Courville. When Damian and Bo were finally together again Bo greeted Damian with kisses. Jones feels great about being able to reunite Bo with his family and hopes to someday be able to see Bo when he is full grown.