A Kalamazoo Boy Scout troop got the chance to put some of their life-saving skills to the test at a campout over the weekend.  They had just embarked on a five-mile hike when they saw a dog run onto a frozen pond and fall through the ice.  The quick thinkers were able to get to him and pull him out just in time.

Troop 205 was on their Polar Bear Weekend camping trip, giving the guys a chance to earn a new badge.

“The plan was just to go on a five-mile hike, and we didn’t really get that far,” Garrett Bloom told WWMT.

“We see this dog like run across the ice on the top of the lake, and we’re like, ‘Oh cool, a dog,’ and then we see the dog just kind of, (gestures) *pssshh* and it fell in the water.”

Bloom and another scout, Frederick Miller, rushed back to their campsite to get a canoe to save the dog, but they didn’t have any oars. 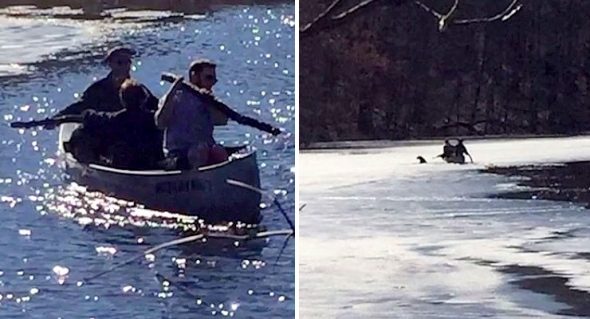 “It was a test of all the things we had learned in scouting and learning to think on our feet and be creative,” Miller explained.

“There wasn’t much around, there were mostly twigs. Then we found two logs and we grabbed some logs and brought them over and used them as oars.”

The two teens and scout master Phillip Miller climbed into the canoe and paddled their way over to the struggling dog.  They had to be extremely careful not to tip the canoe over as they pulled the dog aboard.

“That’s part of the Boy Scouts oath, do a good turn daily, and it’s, it just came,” said Bloom. “It wasn’t anything special to us, we just did it.”