Back on January 10 in Falls Church, Virginia, Erika Davis’ apartment caught fire when she wasn’t home.  A fire on the balcony of the apartment next door caused her roof to catch, and her dog Sadie was stuck inside.  Sadie’s life was saved by firefighter Jesus Escobedo that day, but he took off before Davis could thank him personally.  So, on Monday, Sadie and Davis went to the fire station to thank him in person.

Escobedo was holding a hose fighting the fire on the roof when he noticed Sadie inside the building.  He didn’t have to stop to think twice.  He dropped the hose, and raced into the building to get her out, and got her over to the parking lot nearby.  He finished up fighting the fire and was gone from the scene before Davis had arrived. 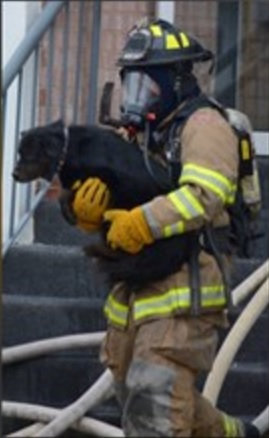 On Monday, Sadie and Davis brought some BBQ and some personal thanks to the brave men that saved more than just a dog for Davis that day.  If you were to ask any of them, the firefighters would tell you they were just doing their job, but Davis is insisting that they did more than they could know.

“They just did more than was required.  They knew she was my family.  I’m so grateful,” said Davis.  “She’s my everything.  It would have been a lot worse if she wasn’t here.  Everything else can be replaced.”

“It’s nice to be appreciated and nice to see that Sadie is doing good,” Escobedo said.