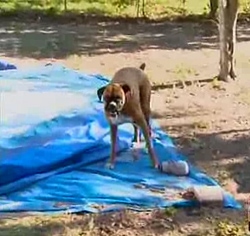 A Bradenton, FL family was spared from tragedy when their Boxer, Bella dodged gunfire to protect her loved ones and pursue armed assailants who attempted to rob the family in their own back yard.

“I’ve never been as scared before as I was Thursday,” her owner, Joseph Thomas said. “I thought it was a prank or something.”

Joseph and daughter Jaydha, 4, were enjoying family time on the swing set in their back yard and hanging out with their dogs when out of nowhere, two men appeared waving guns and demanding money.

In a flash, the family’s two boxers, Bella and Shiloh, charged at the gunmen, barking and barring teeth.

The men opened fire, taking direct aim at Bella and her family. The heroic dog never once wavered, and continued to press forward, teeth barred in a snarl that sent the shocked gunmen running, leaving a trail of bullet casings in the yard and holes in the pool and shed just a few feet away from the swing set. Miraculously, none of the bullets found their intended targets. “I don’t know how they missed everybody,” Joseph said.

Sadly, Shiloh jumped their fence and ran off, and has not been seen since.  Anyone in the area with knowledge of her whereabouts, or information about the suspects is urged to contact the Manatee County Sheriff’s office at 941-747-3011

Joseph admits that he always considered Bella a bit of a coward, and he is immensely grateful to have been proven wrong. “I’ll never get rid of Bella. Never. She saved our life,” Joseph said. “If somebody offered me a million dollars for her right now, I wouldn’t take it.”