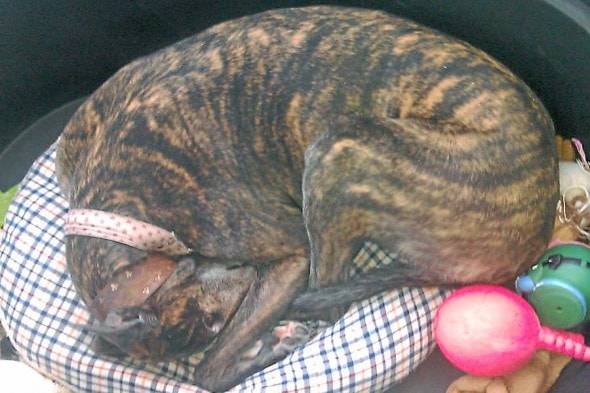 Police found Noah, a six-year-old greyhound, collapsed in the road on November 5th. He was exhausted and beat up. Noah had fought off burglars and then chased them away until he collapsed with exhaustion. After a tough battle for his life he is now back with his thankful owners.

Adrian Parker wasn’t even aware of the attempted burglary of his home in Telford, England until he received a phone call from police on November 5th. “I had just got back from the ice hockey with the kids when I had a call from the police,” he said. “They asked if I had a greyhound and if he was still in the house. It was only when I went to look that I found the conservatory door open and the dog missing.”

Parker took Noah to be checked out by a vet the next day and that’s when the severity of his injuries was discovered. “The vet realized all the bruising had come out and he was black and blue. There were hand marks where he had been grabbed and he had been kicked all over his stomach.” Noah also had internal injuries from the beating he took and

Noah had bravely fought off the intruders who kicked and grabbed him and then chased them until he collapsed in the road. Noah is back at home with Parker and his two daughters, four-year-old Ellena and 18-month-old Rose. He still has some healing to do though. “He’s got a long way to go, both psychologically and in fitness. His paws are still in a really bad way. I’m still trying to track down special boots for him because the ones you can buy from the shops don’t fit him,” said Parker.