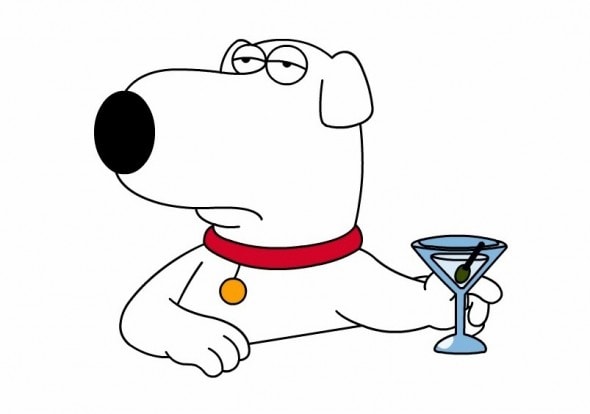 Many people are more upset by the death of an animal on a TV show or movie than they are by the death of a human. Fans of the show Family Guy, particularly dog lovers, were infuriated when they tuned in on November 24 to see the cynical, anthropomorphic dog Brian killed off by being struck by a car. But worry not – Brian is coming back.

So this isn’t really dog news because it’s not about a real dog, but with all the heart-wrenching stories the writers and fans of Life With Dogs endure, the occasional fluff piece must be thrown in!

A few months ago, we did a piece called Does the Dog Die? Many people are so bothered with the concept of an innocent animal being killed on screen that they’ll fast forward or refuse to watch the the film altogether. That’s why a website was created with a list of titles and a key to show people if the animal makes in in what they’re about to watch.

: A pet is injured or appears dead but ultimately lives.

While scanning the internet for dog-related stories in the past couple weeks, this writer has seen a lot of talk about the death of Brian Griffin – fans of the show were really upset. Family Guy’s viewers are routinely presented with scenes of violence and the occasional death, but seeing their favorite cynical, cocktail-imbibing dog be taken away was unacceptable. He was a valuable family member – the voice of reason, albeit a slightly blitzed one, to Peter and the gang when hatching cockamamie schemes.

A change.org petition garnered over 128,000 signatures to bring Brian back. (There are more important petitions circulating to save the lives of real dogs, but people and their priorities, right?) Entertainment news sources report that Brian will indeed be back, but that the petition was not the catalyst prompting his return.

The upcoming episode “Christmas Guy” is captioned, “Stewie devises a master plan to get the one and only thing he wants for Christmas.” Will it be Brian?

2 thoughts on “Brian Griffin Is Coming Back”