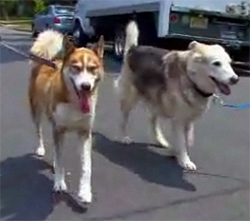 Johnny Brooks Stevenson, Jr., gave his wife a hug before leaving their Hinesville, Ga., home for the deserts of Afghanistan. Stevenson Jr. — or “Pops” as most people called him, had taken a job as a military contractor after a 20 year Army career.

“Girl, I’ll be alright. I’ll see you in six months,” he said. It was the last time she saw him. “I got the phone call on February 15th, and they basically told me that he had fallen to the ground,” said Belinda Stevenson.

The man on the other end of the phone told her that all attempts to revive her husband had failed. She was shocked. “He was my everything,” Belinda said of her husband of 29 years. “He was my best friend, he is my soul mate. He will be my soul mate for eternity>”

The grief-striken woman said that in mourning his loss, she took comfort in the fact that she had a reminder of him – his constant companion, a dog named Savannah, was her rock. She said whenever Pops was home, Savannah was glued to him.

“She would grab the water hose from him and she would basically run after him with the water hose, getting herself soaking wet,” recalled Belinda.

Which is why she was devastated when a storm blew over the fence in the family’s backyard in May, and Savannah ran away.

“I felt like when I lost Savannah I lost another part of my husband,” said Belinda.

“That dog was something he cherished,” said their son, Terrell Stevenson, 24. “For her to have gotten away, it just hurt everybody in our family.”

For weeks Stevenson and her son searched for their dog, but to no avail. No calls came, and they could not find anyone who had seen her. 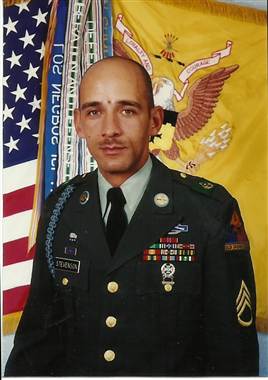 Weeks later Terrell was checking Facebook animal rescue pages when a picture caught his attention. Carpathia Paws, an animal rescue, listed Savannah as a found dog who would be euthanized shortly if she did not find a home. Just two hours before she was to be euthanized, animal lover Julie Ogden of West Wood , N.J., pulled the husky from the shelter and brought her home. Ogden says she was determined to find the dog’s owner.

“Somebody really loved this dog. You could tell she really trusted people. So we were kind of wondering how she ended up in animal control when she did have a loving home,” said Ogden, who volunteers for The Last Resort Rescue.

Terrell eventually contacted Ogden through Facebook, and was amazed when she offered to drive Savannah all the way to Georgia as part of a caravan campaign to raise awareness about the plight of shelter animals. After a 14 hour journey, Savannah walked out of the transport trailer and into the open arms of her family.

In an interview with NBC, the Stevensons expressed their gratitude and said they had found another silver lining in these recent tragedies:

Both the passing of Pops and Savannah’s disappearance led them toward a new mission in life. Terrell is following in his father’s footsteps: he has already completed two tours in Iraq with the Army and is now stationed at Hinesville’s Fort Stewart.

Belinda Stevenson says her broken heart was mended when Savannah came home. “It’s like I’m getting a piece of him back, I’m getting a little piece of Pops back. I really am. And that does my heart so much good,” she said.