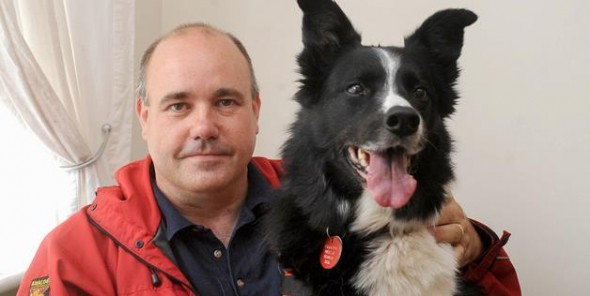 After years of heroic service Mij is ready to retire. The Welsh Collie has saved more missing people than any other dog in England.

Initially as a puppy it didn’t seem like Mij would be able to succeed as a search and rescue dog, she has some health problems that hindered her stamina and prevented her from being able to follow traditional techniques.

Her owner and trainer Iain Nicholson refused to give up on her though and with the help of expert Tom Middlemas taught her scent discrimination. This allowed Mij to distinguish an individual from a crowd of thousands with clinical accuracy. This new technique not only helped Mij but it revolutionized the way rescue dogs search.

One of the main reasons that Mij’s technique is now preferred is the amazing success that Mij has had. In her seven years of search and rescue she has saved 14 lives, far more than any other dog in the United Kingdom. Mij became known as the most reliable dog in the country and was called upon by police forces across the country for help.

One of Mij’s greatest rescues was of an elderly woman who had been missing for over 24 hours. Over 100 people had been searching for her but with no luck, so they turned to Mij for help. Mij took a sniff of an item of clothing belonging to the woman and within minutes had located her. The woman had fallen into some wild bushes and was not able to be seen.

“It was truly one of her greatest moments and helped her to become known up and down the country,” said Nicholson. “The woman Mij saved would never have been found but thanks to her she was rushed to hospital and made a full recovery.”

Mij’s rescue efforts have become so well known that she has been called Britain’s real-life Lassie. Although she will no longer be going out on searches, her technique is being taught to the next generation of search and rescue dogs. Her legacy will continue on in them.