This story comes from Chantel Difford, a woman from the UK whose family visited Greece and fell in love with a stray. 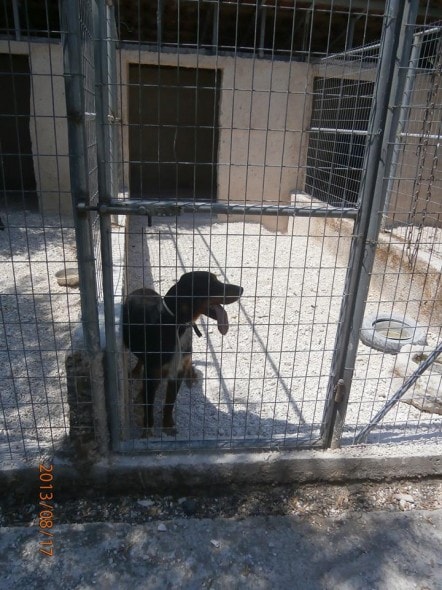 We have recently visited the Greek island of Zante and whilst over there we fell in love with a stray Gordon Setter that had been dumped with no food, water or shelter in a churchyard in Zakynthos Town. He was trying to follow tourists and tried to get on the coach with them. He was found eating wood because he was so hungry. He was thin and emaciated, but always seemed to crave human contact. It is thought that his original owner purchased him as a hunting dog and that he was no good so was discarded like rubbish to fend for himself. Most stray dogs only live up to 12 months, as they are often beaten, abused, poisoned, some have their legs tied together and are dumped in the mountains to die a slow and painful death. We were so moved by his plight to survive that we have paid for him to be kept in a secure kennel while we raise funds to fly him home to the UK. My daughter was 9 years old yesterday and has written a moving story about her time with Bebis and Zante Strays.  Please read the following true story written by my daughter. 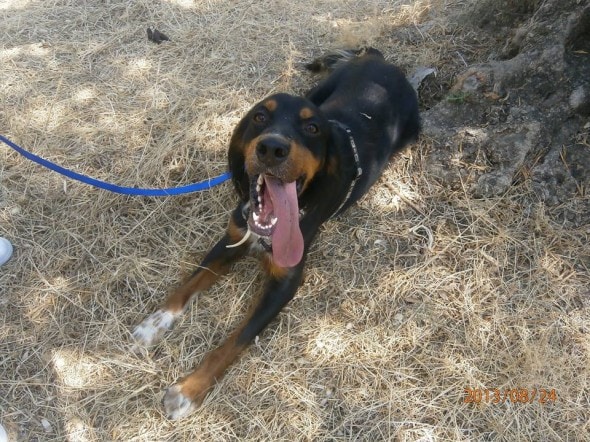 My name is Lily-Kate and I am 8 ¾ years old. This year I went on holiday to Zante.

In Greece people don’t have much money to feed their animals. There are lots of stray cats and dogs that have to catch mice and beg in restuarants for food. Lots of Greek people own dogs and some tie them to trees or barrels all the time. This upset me because dogs shouldn’t be tied up all the time and kept hungry, they should be taken indoors and cuddled, fed, loved and taken for a walk. Some dogs and puppies that nobody wants are dumped in the mountains or in another village and some are thrown in bins like they are rubbish being left to fend for themselves. Some are lucky and are rescued by kind people, others are left to die a long suffering death. Mummy contacted a lady called Margarita who runs an organisation called Zante Strays and we went to see a stray dog called ‘Bebis’ who had been rescued of the streets of Zakynthos Town. Bebis had to stay at a Pension, this is what greek people call kennels because Bebis didn’t like cats. Maybe he was trained to chase them, no-one will ever know for sure. When Margarita drove us to where he was staying it looked like a prison. We eagerly got out the car and there was a girl waiting for us. She let us in to see Bebis, he looked so sad behind the bars of his cage. I called his name and his tail started to wag and Im sure he was smiling, but WOW his tongue was huge and pink!

Mummy wanted to take him out to see whether he liked us. We were allowed some special time with him and he was a big gentle boy. He loved cuddles and cleaned all my face and ears with that big pink tongue. It felt like velvet. Mummy loved him straight away and I did too! What was there not to like about this gorgeous boy? Daddy didn’t take much convincing either, with 3 sets of pleading eyes looking at him, he soon melted and enjoyed a blokey kind of bonding with Bebis. We asked if we could take him for a walk, but we couldn’t because the girl that had met us at the gate was busy and wanted to go. When we were leaving she grabbed Bebis and shoved him back in his cage making him cry out loud. I could tell by Mummy’s face that she was angry and wanted to get cross with her, but we knew that we were guests and would hopefully be able to meet Bebis again and rescue him from this prison. We collected a stray called Thomas and I took one last look back at Bebis who was looking sad again. I wanted to cry. It was funny when we we left because a phone started ringing in Margrita’s car and nobody recognised the ring tone. It turned out that Margarita had accidently picked up the grumpy girls phone. Mummy said it was ‘Karma’ for hurting Bebis.

Thomas enjoyed being in the car with us and was also rescued by Zante Strays and was being moved out of the prison and to a foster home. After a short drive we arrived at a big house and I remember thinking, Thomas you are one lucky boy! Natasha was special and devoted to looking after animals that nobody loved or wanted. She showed us around her garden and we saw a white dog in a run, he moved to the back as we approached and Natasha explained that someone had deliberatly tied wire tight around his belly and then dumped him, alone to suffer. He was rescued about a year ago and was starting to trust humans again, but only one small step at a time. At least he has all the care and love he needs and is safe from bad people. I sat on the steps and cuddled a rescued white puppy that had also been dumped to fend for itself and then other dogs started to come and investigate me. Mummy said that I looked like Dr Dolittle (he loved animals as well).

We then had to leave because Natasha had to go to work at her paid job. She is a volunteer for Zante Strays, which mummy says means you open your and heart to help defenceless animals and receive their unconditional love in return. If love could be counted volunteers would be gazillionaires! 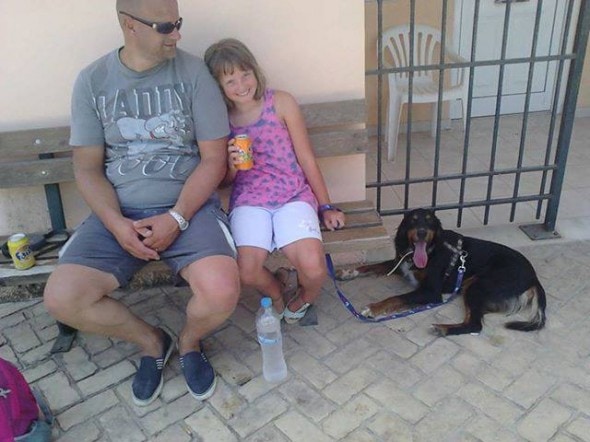 Next we had to drop by Margaritas house because someone was coming to mend something. This meant that we could play with the dogs at her house. Daddy loved Ody because he was so laid back, we played with the dogs and Mummy took some photos in between the licks and cuddles. It was soon time to leave and go back to our hotel.

Margarita asked us if we wanted to go on a sponsored dogwalk on Wednesday to raise money for a rescue dog called ‘Calvin’. Calvin was born with a hip problem which means its painful for him to stand, sit and walk. He needed to go to the mainland to have his operation which was going to cost a lot of money.

Margarita sent Mummy a message to say that a lady called Bettina would pick us up at 7pm. I was so excited that we were all ready and waiting in reception by 6.30pm. We waited and waited, but still no sign of Bettina. Mummy messaged Margarita to say we had been forgotten, as it was 8pm and the walk was about to start, but in Kalamaki!  It turned out that Bettina didn’t know what we looked like, so sat in her car outside, so we never got to go. I was so sad and angry with Bettina. I even told Mummy I hated Bettina for not picking us up! I started to cry because I wanted to see all the kind people and dogs again, especially ‘Calvin’ the dog that needed the operation.

Margarita contacted Mummy and we were able to see Bebis again. When we arrived he was so excited to see us and his tail was wagging and that big pink tongue was hanging out again. We were going to take him to Tsilivi to meet another foster mum called Julie. Julie had a rescue boy already and Bebis growled at him. This meant that Bebis would have to go back to the prison after our walk.

We walked Bebis around Tsilivi to see if we bonded as a family. It was brilliant to finally hold his lead, but Mummy said we had to take turns to walk him. I felt proud because Bebis is the bestest Dog in the world. We found a bench and all had a drink, even my new furry brother had chance to chill. Soon it would be time to hand him back. Again. We started the long drive back to the prison. Then we had to leave Bebis, again. I tried hard not to cry. Why did he have to stay there, his only crime was chasing cats!

Margarita offered to drive us back to our hotel as she needed to visit a lady called Anne. She asked if we would like to go along as well. Anne is a puppy foster Mum. Annes home was an animals dream, she greeted us at the gate with a big friendly smile. I was allowed to name a puppy. I decided on ‘Bert’ because he was big and fluffy. Anne was very special and full of love. I love puppies but they were everywhere, pulling, tugging and playing. Seeing the puppies cheered me up after having to leave Bebis in his prison.

It was soon time to leave and return to our hotel. The day went so fast, faster than when Im at school! Mummy said we have memories and photos to remind us of our exciting days with Margarita and all the foster families of Zante Strays.

Now we are back at home in the UK and we are all trying to raise funds to fly Bebis direct to Bristol which Mummy says is closer, but more expensive. When he is ours to keep we will call him ‘Chance’ because we gave him a chance.

Not long now Bebis and we can curl up together and never have to say goodbye again! Oh, Mummy says I will have to pack my toys up after we finished playing!

Thank you for taking the time to read this true story.

add ‘Bebis Difford’ as a friend on Facebook to follow his story as his happily ever after life unfolds. Any donations can be made through PayPal – https://www.paypal.com/uk/cgi-bin/webscr?cmd=_flow&SESSION=Ifbi_Bkt1Pl6R46N9AY-M7yOmbwUghusOLOAphh2ollAdumNCOcEyLLQ6gy&dispatch=5885d80a13c0db1f8e263663d3faee8d48a116ba977951b3435308b8c4dd4ef1

You can also donate here. 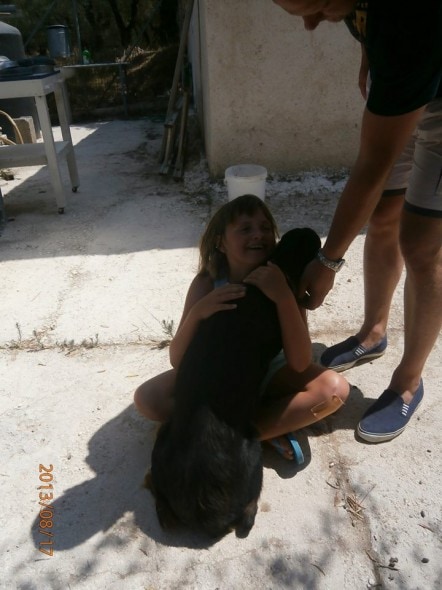