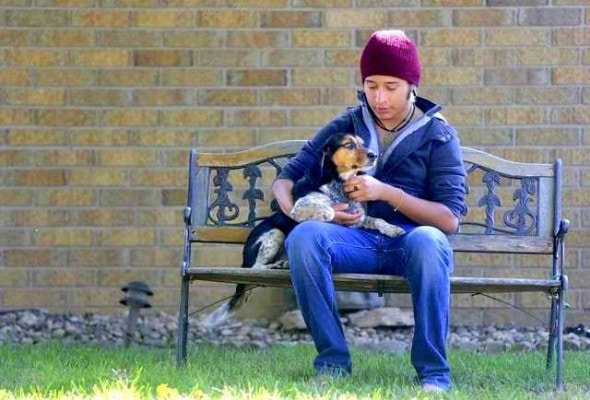 Seventeen-year-old Bernardo Cano is best friends with his dog Duncan, and was willing to do whatever it took to get him back home when he went missing.

On August 5, the Appleton, Wisconsin teen took his beagle mix outside for a little while before leaving for work. He brought him back inside, but when Bernardo returned home, Duncan was gone. He has no idea how or why the dog left.

Bernardo posted about the disappearance on Craigslist, and was contacted by Nikki Chaganos, a volunteer caseworker for Lost Dogs of Wisconsin, who posted Duncan’s information on their Facebook page. Using the $40 in his savings account, along with some help from Lost Dogs, Bernardo was about to plaster seven towns with nearly 100 ‘lost dog’ posters – all on bicycle.

“I biked from Chilton to Hortonville, Kaukauna, Neenah, Menasha, Grand Chute, Little Chute, Kimberly. I did this pretty much day and night looking for my dog. I wouldn’t give up on him. I was actually hoping someone would take him in. … I couldn’t stop,” Bernardo said. “People told me, ‘You really should forget about this. Just leave him be.’ It was pretty hard to do after all the things we’ve been through together, and the connection we have together.”

He worried even more because treacherous storms – including six tornadoes – swept through the area two days after Duncan vanished. Two weeks went by, and Bernardo received the phone call he had been dreaming of: the Fox Valley Humane Association had a dog they believed was his.

“I said, ‘I will tell you exactly how he looks and you can tell me if it’s him,’” Bernardo said.

The Appleton Police Department had found him in a park, and turned him over to the Humane Association because he did not have tags. Bernardo went to see Duncan as soon as he could, and cried at the sight of his heavily-sedated friend.

The dog had fractures in his left hind leg, ankle and paw, and an open wound that was becoming infected; he had likely been struck by a car. Staff believed his injuries were about a week old, and that amputation may become necessary.

Because of donations from kind friends and strangers on Lost Dogs, Bernardo was able to pay the $267.85 to have Duncan released into his care. The shelter was even generous enough to waive some of the veterinary fees.

“It was so strange looking at him … he looked twice as old at this point with the condition he is in,” Bernardo said.

It didn’t really matter – he was just glad to have his friend back. Unfortunately, he soon needed another $157 for an appointment at the Appanasha Pet Clinic. Altruistic people stepped in once again; friends of Bernardo and Nikki’s helped, and he was able to raise some money on his own.

“I started playing (my accordion) downtown — I’m a musician — and started performing,” said Bernardo, who raised $20 playing for an hour in front of a coffee shop. “I put out my poster, and people kindly donated money to the cause. I got it just in time for the next day to pick him up (at Appanasha).”

Now he is working to keep Duncan healthy, cleaning his wounds and changing bandages, which has saved his leg.

“Thanks to his antibiotics and the homegrown tea and kefir I’ve been giving him, Duncan’s infection is getting better,” said Bernardo, whose father makes effective herbal remedies.

“I’m lost in the debt,” Bernardo said, “but one thing is for sure, my buddy is home. And nothing will ever take him from me again.”

The aspiring artist has been creating cigar box guitars and jewelry to sell on eBay to keep up with vet expenses.

“At 17, he has shown he is willing to do whatever it takes to keep Duncan healthy and happy,” Nikki said.

Bernardo is eternally grateful for all the help he as received.

“It’s really amazing to know there’s these kinds of people out there,” he said.

But this story’s not over yet! During one of his many visits to Fox Valley to see if Duncan had been found, Bernardo encountered a woman and her teary-eyed daughter. They were there to surrender their miniature Pinscher named Scout.

“I sat on the bench crying,” Bernardo said. “It was at my breaking point. There was a little girl holding a puppy and she was crying as well. She came up to me and asked if I would be able to take care of her dog. She said they weren’t able to have it anymore.”

He took in Scout, who has since become Duncan’s protector.