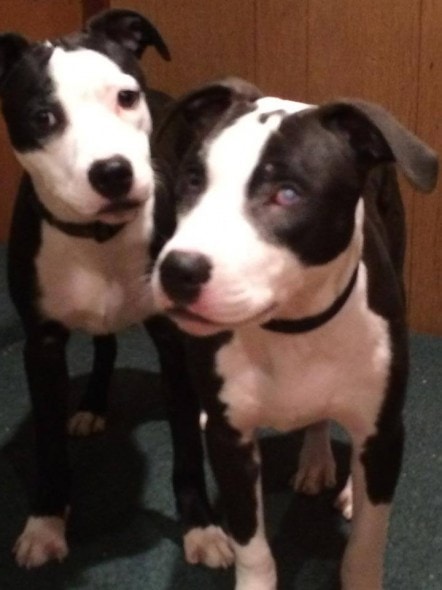 When a picture of Jeffrey and Jermaine, two abandoned pit bull-lab mix puppies, went viral last week over 10,000 people from around the country wanted to adopt them. Out of all the applicants one lucky couple was selected and now the two brothers have a permanent home.

Jeffrey and Jermaine captured the hearts of thousands with their special bond.  The two were found abandoned on the streets of Philadelphia in October. Jeffrey was blind and his brother Jermaine took care of him and acted as his guide. Last week a picture of the two hugging each other while they slept went viral and the rescue caring for the two, Operation Ava, was flooded with adoption requests.

Operation Ava wanted to make sure they found the right family for the two bonded brothers. Out of all the applicants they found that family in Veronica McKee and Jonathan Hochman.

“I saw the picture and thought what everybody else thought – that’s the cutest thing I’ve ever seen,” said McKee. “But then I realized, despite all their special needs we could nurture that bond, provide them with the environment they needed.”

McKee and Hochman are thrilled about the new members of their family, though their cat Blabbus might not be as thrilled.

“We were just discussing that this is her birthday and this probably is not the present she’s looking for,” McKee said jokingly.