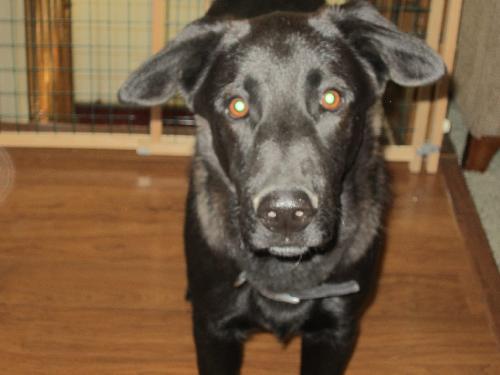 A Utah family’s foster dog is being credited with saving his family from a potentially dangerous situation over the weekend. Lexington alerted his family to a stranger lurking on their back porch early in the morning on Sunday.

Lexington has been fostered by the Kemp family for only about a month after the family found the stray Labrador-German Shepherd mix.

“We found Lex about a month ago at my son’s house, no collar, no tag,” said Ken Kemp.

The Kemps took Lex to the local animal shelter, but agreed to foster him a week later.

When Kemp flipped the light on, he saw a strange man sitting on the back porch.

“He had a black hoodie on and was pretty much all in black, sitting and tucked up behind the charcoal broil,” said Kemp. “I quickly saw his face and we made eye contact and I backed off.”

Kemp immediately called 911. Police were already in the neighborhood looking for a man that had refused to pull over for a traffic violation and fled from officers on foot.

“They said they knew there was a guy in the area and they had been looking for him,” said Kemp. “(The police) came though the yard, but apparently (the suspect) ran because they didn’t find him here.”

The Kemp family is still hoping to find Lexington a good home. They would love to keep him themselves but feel he would be better suited in a younger home since he is still so young. For information on adopting Lexington go to www.rescuerovers.org.