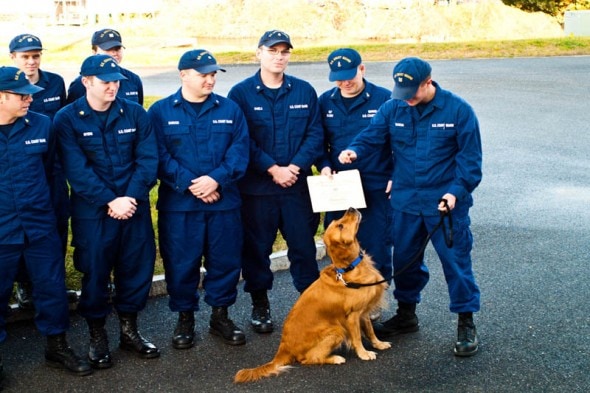 In a ceremony held on Monday morning, a two-year-old golden retriever named Buddy became the official mascot of the U.S. Coast Guard Station Menemsha in Massachusetts.

Budd was adopted by the crew about two months ago from a family in Rhode Island. When the family’s new baby arrived he was a little too rambunctious and the family was looking to find him a better home where he could get more exercise and attention. His new home is a Coast Guard station. The station is manned 2r4 hours a day and has 26 crew members so Buddy is able to get the attention he needs.

Buddy is the successor of the station’s former mascot, a yellow Labrador retriever named Bridger, who passed away in 2011. Bridger was the mascot for seven years and was also adopted from a family needing to find their dog a new home. Canine mascots are a Coast Guard tradition. They have served as both companions and search and rescue workers.

The crew at Menemsha is very happy to have a dog among them again. “It seems like the crew is a lot happier. It’s great to come in and have the dog here. He increases morale. People who had dogs or always wanted dogs but weren’t ready for it, having Buddy teaches them a level of responsibility,” said Station Chief Jason Olsen.

On Monday morning the crew assembled in front of the station for a ceremony. Chief Olsen read their new member’s certificate of enlistment, “Be it know that Buddy, in selfless service to his country and affirming the oath of enlistment in the United States Armed Forces, hereby enlists in the United States Coast Guard at the rank of Seaman Recruit.” Buddy, who was dressed in a bright blue collar decorated with his rank and embroidered with his name, shook Chief Olsen’s hand. Buddy’s paw print will also go on his enlistment certificate.

Chief Olsen expects Buddy to move up rank quickly. Buddy will participate in a doggy version of boot camp, consisting of running around the property and practicing his “sit” command.  One advances in the Coast Guard through performance qualifications known as “practical factors.” Chief Olsen has asked his crew to come up with a list for Buddy to accomplish. Some of the tasks proposed include chasing sea gulls and patrolling the boat dock.

A benefit of Buddy’s official designation as a mascot is that he can now be treated at military veterinary clinics. Mostly he will spend his days chasing wildlife off the pier, greeting everyone who walks into the station and enjoying the company of the 26 other crew members.