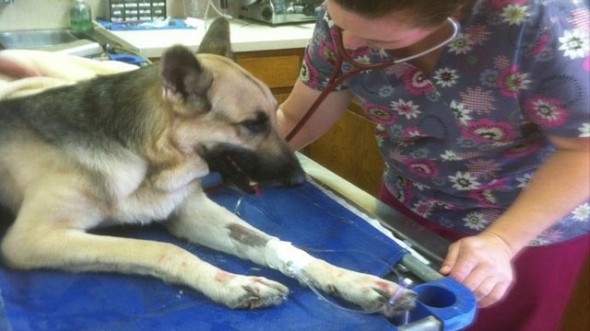 A German Shepherd named Rookie is lucky to be alive after being thrown from an overpass onto a busy Oklahoma City highway.  He fell over 16 feet and managed to not be struck by a single car before being pulled to safety by an Oklahoma Highway Patrol trooper.

“Other than the leg fracture, he’s got a few skid marks on him, and that’s about it that we can find right now,” Deer Creek Animal Hospital vet technician Kate Bellah said.

The four-year-old survivor also has some internal injuries, and is in critical but stable condition.

“Other than that, he has pretty good spirits,” said Bellah.  “He’s still got a long way to go before he’s probably going to be ready for any kind of surgery.”

Vets are waiting to perform surgery on his leg because Rookie is likely still in shock, and being put under anesthesia is risky.

A truck driver witnessed someone heartlessly chuck him over the bridge and called in the incident.  The Sheriff’s department is searching for Rookie’s owner, who may be the person responsible.  The Humane Society is covering the medical treatment and is offering a reward of $2,500 for information leading to the arrest of the party responsible.  Anyone with information is advised to call the Oklahoma County Sheriff’s Office at (405) 869-2501.

“This is just a tragic, really sick situation,” Sheriff’s Spokesman Mark Myers said.  “For someone to take a defenseless dog and just toss it off of a bridge over a major interstate, I really don’t understand how someone could do something like that.”

Jennifer Fisher, the OHP trooper who rescued him, has adopted the injured dog.

“The look on his face and his eyes just broke my heart,” she said.
News9.com – Oklahoma City, OK – News, Weather, Video and Sports |