Besieged by animal rights activists, a rural Bulgarian village has agreed to ‘water down’ a bizarre dog spinning ritual that is said to ward off rabies. Residents of the village of Brodilovo have been under constant pressure to cease the practice of dog spinning since foreign media discovered and reported on the tradition in 2005. For a few years, no spinning rituals were reported, and it was assumed that after years of criticism, villagers had decided against engaging in dog spinning. 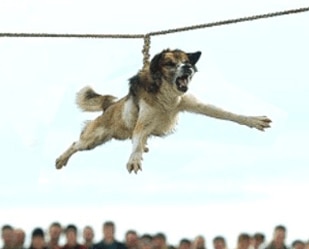 That assumption was incorrect. Villagers revived the practice last year, despite the fact that Prime Minister Boyko Borisov officially condemned it as barbaric. Town mayor Petko Arnaoudov said “You cannot stop a traditional custom with a simple order.

Knowing this to be true, Bulgarian animal welfare organizations visited the village recently to observe. Days before the planned ritual, Bulgarian non-profit “Animal Rescue Sofia” announced it that would organize a trip to Brodilovo. Observers say villagers did not tie or spin the dogs this year, but instead, simply threw them into the water.

“It is not ideal, but it is better than it was. Some of these traditions have taken root over hundreds of years. You don’t change them overnight,” said a spokesman.

Many of the folklore traditions observed in the area are derived from pagan traditions, and some have become world-renowned, such as fire-dancing – or nestinarstvo, which is only practiced in this region.