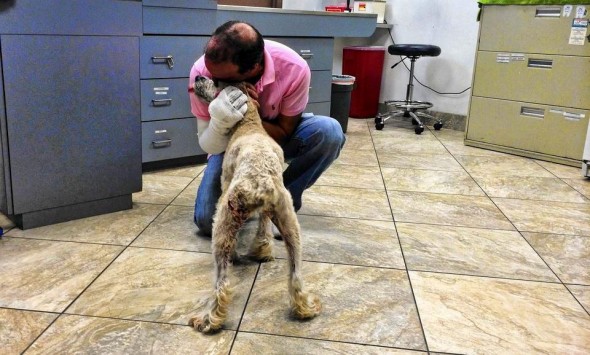 Ruby was accidentally set on fire when she jumped over a flame after being treated with flammable tick repellant.  Quick-thinking owner Jess Olivas suffered a number of burns, but grabbed the dog and jumped into the pool, saving her life.  Now they have both recovered, and Ruby was sent home for a happy reunion with her family.

The eight-year-old wheaten terrier had been treated with a flammable insecticide, and Telma Botcherby saw ticks jumping off.  She attempted to set fire to one of the ticks on the floor, and when the grill lighter clicked, Ruby was startled and jumped directly over the flame.  She quickly went up in flames.

“She was just a ball of fire,” Jess said. 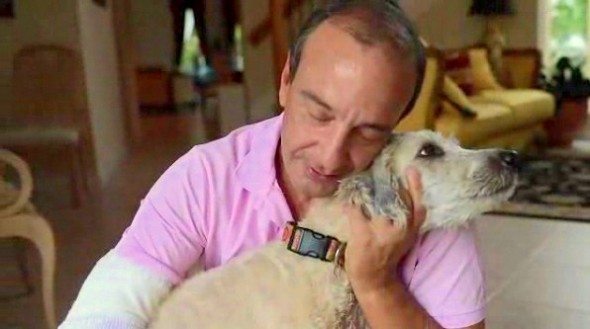 He opened the patio door, grabbed the dog and leaped into the pool.  In the process, he suffered burns to his face, arms and chest, nearly 25 percent of his body.  Jess was hospitalized at Jackson Memorial Hospital in Miami, and to everyone’s surprise, he did not require skin grafts for the second- and third-degree burns.

“The doctors were perplexed,” he said.  “Two weeks after they removed my bandages, my skin had started to grow.”

Ruby was also quite fortunate.  The family scrambled to find an open vet they could afford, and was put into contact with Peter Krolikowski, whose staff worked on the scorched pup for free.

“Without them, Ruby would be dead by now,” Jess explained. 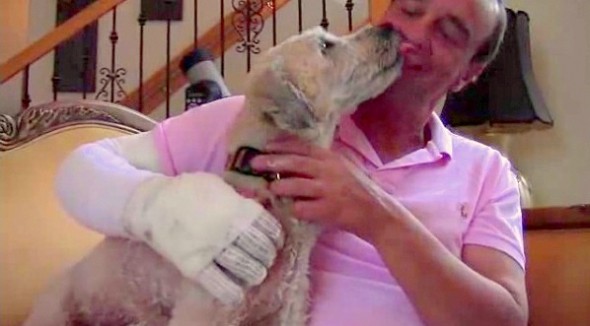 According to vet tech Justin Harris, Ruby’s long fur saved her from being burned even worse.

“She sustained most of the burns in her lower abdomen,” he said.  “As of right now, there was no need for any surgical procedure.”

She has been on pain medication for weeks, and was sent home with antibiotics and ointment to help her heal.  She must go in for a check-up every few days, which will still be free of charge.

The family has learned their lesson about treating animals with dangerous, flammable insecticides.

We apologize for horrible auto-play ads.