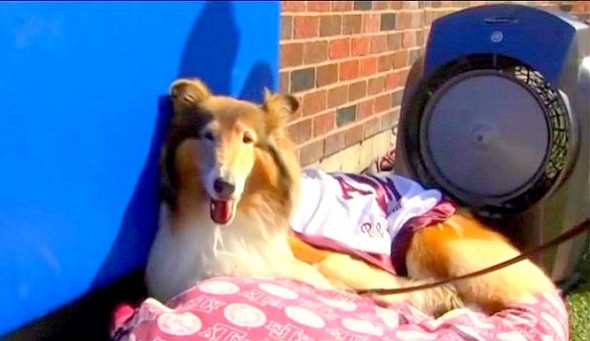 Reveille VIII, the mascot for Texas A&M, nearly got crushed by a player that got shoved out of bounds in Saturday’s game.  Thankfully, a cadet standing nearby saw what was about to happen and jumped in front of the Collie.

Strangely enough, the best block of the whole game happened off the field.  (Though based on the 58-6 score, SMU certainly wasn’t making any.)  Rev was hanging out on the sidelines at the Aggies game when defensive back Nick Harvey knocked SMU wide receiver Der’rikk Thompson out of bounds.  Thompson’s momentum had him heading toward the wall Reveille VIII was lying down in front of.

Rev had been relaxing on her dog bed, being cooled off by a large fan that had been placed next to her.  When Thompson nearly blindsided her, Cadet Ryan Kreider dove in front of her and stopped her from being trampled.

“I’m just doing my job,” he said. “I see a receiver coming by… a little bit of an overthrow by the quarterback… coming straight towards Rev… first thing that comes to my mind, I have to protect her… football instincts took over, went ahead and lowered the shoulder, and I made sure they weren’t going to hit her.”

Rev is the eighth in a long line of mascots dating back to Reveille I in 1931.  These dogs are dearly cherished, and as evidenced by Kreider’s move, greatly protected.

“Reveille, the first lady of Aggieland, is the official mascot of Texas A&M University. She is the highest ranking member of the Corps of Cadets being the only bearer of five silver diamonds… Reveille is the most revered dog on campus. Company E-2 has the privilege of taking care of Reveille. If she is sleeping on a cadet’s bed, that cadet must sleep on the floor. Cadets address Reveille as ‘Miss Rev, ma’am.’ If she is in class and barks while the professor is teaching, the class is to be immediately dismissed.” 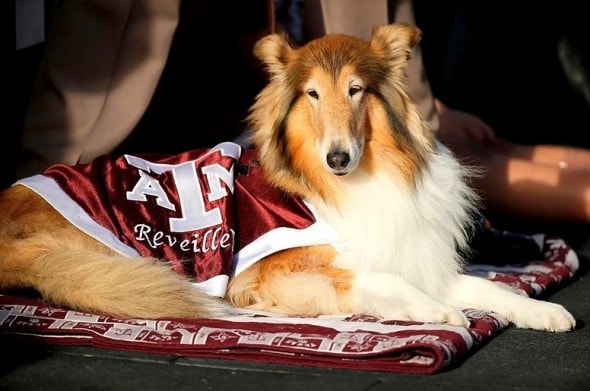