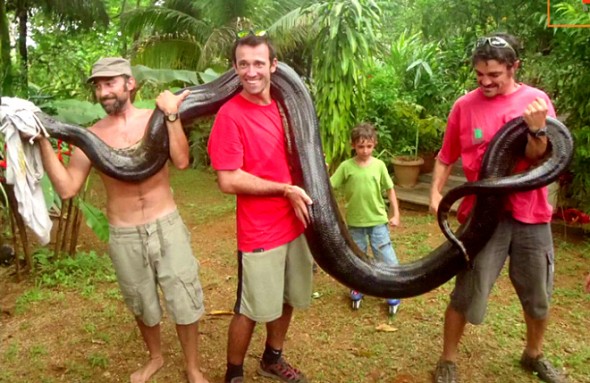 When an anaconda in French Guiana ate a man’s dog, the man’s other best friend, math teacher Sebastien Bascoules, vowed to take care of the snake.  He and a friend caught the behemoth and moved it to a less human-populated area.

It came as a devastating shock to the man when he discovered that his best friend – his dog Minus – had been devoured by the massive snake right outside of their home.  He told Bascoules what happened, and the math teacher was only too eager to take on the challenge of getting the 17-foot beast moved to an area safer for the neighborhood pets. 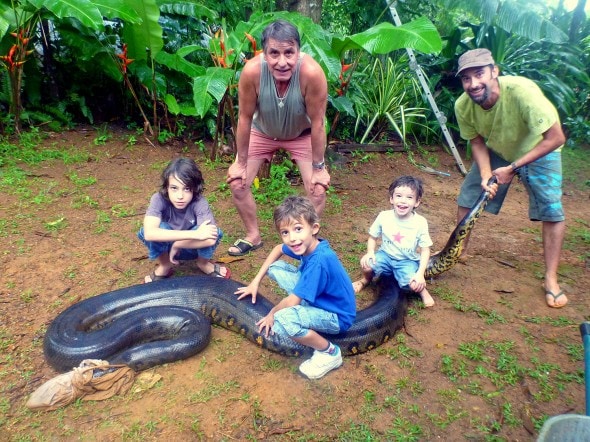 “At first I was not scared because I thought it was smaller.  But I was very surprised by his strength and his length — more than 5 meters,” Bascoules said.

“Since I was 10 years old, I have liked handling reptiles, but this was the biggest snake I had ever seen and I had ever caught.  It was so big, I asked to my friend to help me by catching his tail — otherwise it could strangulate me.”

After wading into the water and corralling the anaconda, they got it into a tub and brought it to Bascoules’ home for the night. 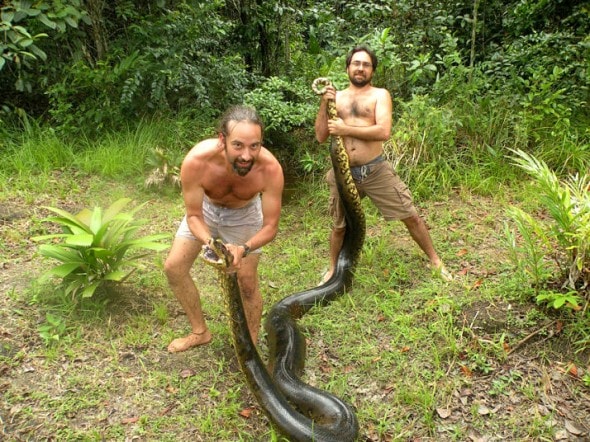 “My wife was worried it might escape from the bathroom during the night,” he said.  “We didn’t have to be worried because I put a cloth on his head so it was blind and became like a big worm.”

The next day Bascoules transported the snake to a river six miles away to a deeper part of the river.

“It is really common to come across snakes in French Guiana, there are 98 species here,” he said. “I have caught between 15 and 20 anacondas. To capture a snake this size is a dream come true.”