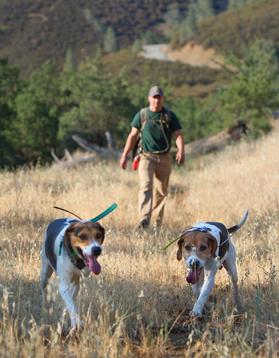 Last Wednesday, Governor Jerry Brown of California signed a bill banning the use of dogs to hunt bears and bobcats. The bill will take effect on January 1st, 2013. This is just one of many animal welfare bills Governor Brown has signed this year. Many of the bills have received bipartisan support. This most recent bill had opposition from the hunting community and many Republicans.

The bill makes California the 15th state that prohibits the use of dogs in hunting bears. Typically dogs are used to chase bears up trees where they are then shot by the hunter. The bill does allow for three exceptions to the ban on using dogs. Dogs are permitted when conducting wildlife research, when a permit has been issued to kill an animal causing a nuisance, and in the case where an animal unintentionally comes onto private property where the owner has a dog. The bill gained a lot of attention as hearings were held and attended by passionate hunters and those supporting the bill.

The hunters maintain that the use of dogs in hunting bears is essential to managing the bear population. “Only a fifth of bear hunters use dogs, but they harvest about half the bears,” said Bill Gaines, president of California Outdoor Heritage Alliance, a hunting advocacy group. There are 25,000 to 30,000 bears in California according to the Department of Fish and Game. Bear hunting season runs from September to December or until 1700 bears have been reported killed. Gaines expects without the use dogs more bears will threaten livestock or public safety. Assemblyman Jim Nielsen also disagrees with the bill, noting that it infringes on hunters’ tradition and culture and will also cost the state $278,000 annually from reduced hunting tags.

Those supporting the bill find the use of dogs in bear and bobcat hunting unethical. “There is nothing sporting in shooting an exhausted bear clinging to a tree limb or a cornered bobcat,” said Senator Ted Lieu, who authored the bill. The bill was backed by the Humane Society of the United States, who was prepared to continue to fight against bear hunting in California if the bill did not pass.

Other animal welfare bills Governor Brown has signed into action this year have had more overall support. These bills have included doubling the fine for anyone convicted of cockfighting and increasing the fine for dog fighting and other types of animal fighting. He also signed a bill that makes it more difficult for those charged with animal cruelty to regain custody of their animals.

Gaines supports many of these bills, but has an issue with the most recent bill and its implications on hunting. “On bills about cockfighting or humane treatment of dogs and cats, I don’t have a problem with that,” he said. “Hell I have two dogs and cats at home. But when it comes to hunting, it’s a whole different ballgame.”