The California Highway Patrol (CHP) got to play dog rescuers today, after a frightened little dog somehow got onto the Bay Bridge and into traffic.  The Chihuahua was not hurt in the event, and now the police are looking for the dog’s humans.

Early this morning a call came into the California Highway Patrol of a little dog stuck on the Bay Bridge.  The Chihuahua was running along the westbound lanes of traffic, and people were concerned the dog would be hurt.  A CHP officer followed behind the dog, until they got to a point the officer could safely dismount his motorcycle safely, and grabbed the dog.

No one was injured in the process, and traffic on the bridge didn’t suffer too much of a traffic jam.  The CHP posted a video of the rescue on their Facebook and Twitter pages.

Chihuahua rescued from #BayBridge has been picked up by SF County Animal Care. Pls call 415 554 6364 if he’s yours pic.twitter.com/x2c607XtR5

Now law enforcement officials are working to get this poor dog back home.  They are asking anyone that recognizes the dog call them at 415-554-6364 to reach San Francisco County Animal Care.  The dog will be kept safe and sound there until the family is located. 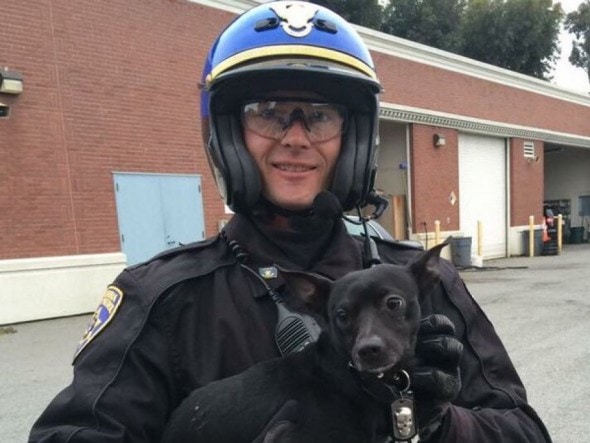