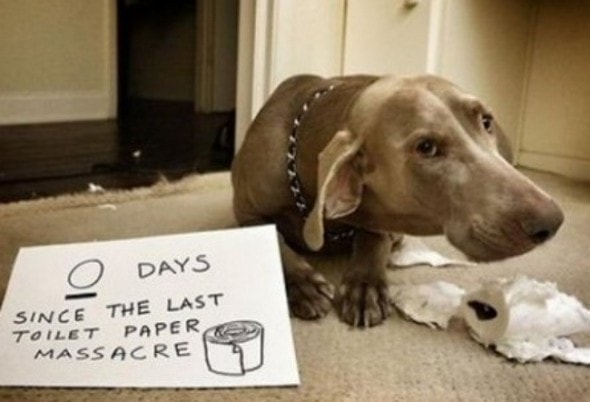 It seems clear that someone has been in the bathroom. Using the toilet paper.  But using the toilet paper in a manner for which it was not initially designed.  Things, however, have a way of becoming multi-purpose in function.  Depending, of course, on who you are and what your intentions may be. 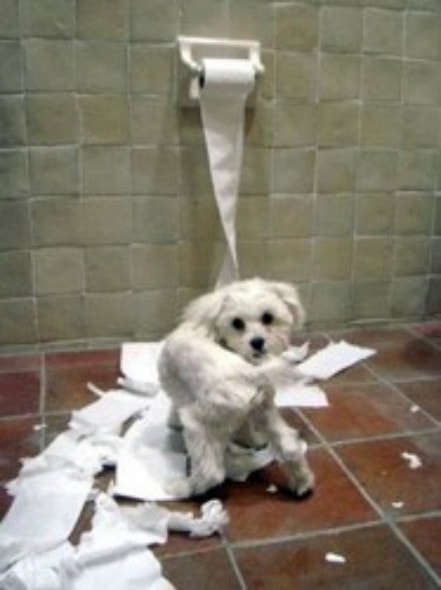 There doesn’t seem to be a good reason why dogs, and certainly cats, are attracted to playing with toilet paper.  Fair enough, human children are also in on this particular act.  When dogs are older, it is possible that they may eat things that aren’t good for them like toilet paper or other odd objects such as rocks, sticks, plastic, or animal feces (which is specifically called caprophagia), but this particular issue, called pica, has no clear identifiable causes.  Some professionals think it may have something to with stress or lack of attention and possibly a clue to an underlying medical condition, but it seems that the parameters are extremely varied, making it nearly impossible to pin down the reason behind the behavior.  For puppies, this is often exploratory, but if your dog is over the age of two and eating odd objects on a regular basis, it is important to have them checked out.  While the causes behind pica are not fully known, the eating of things that are not intended to be ingested by an animal, there may be good cause for concern.  Blockages may occur within the animals system,  there could be something more critical going on with your pet, or it could as easily be nothing at all, which is still as good a reason as any for a visit to the vet. 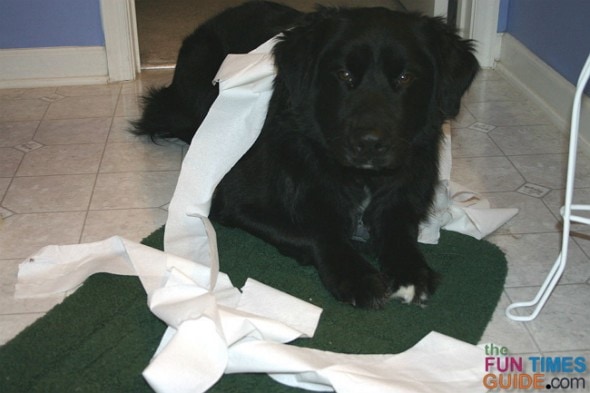 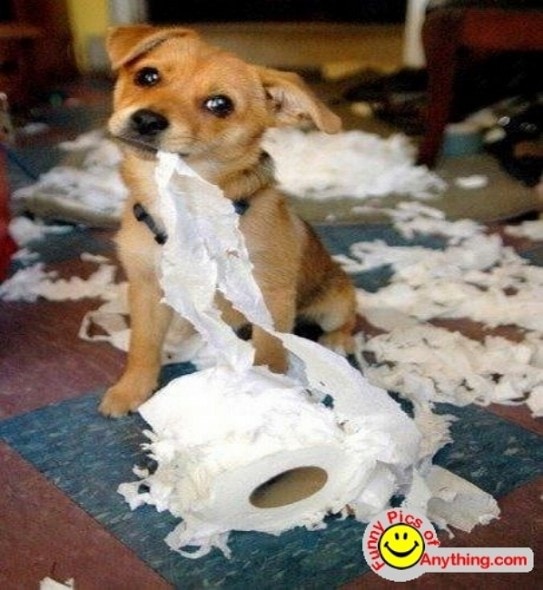 As to puppies, it seems that it is simply about play.  It’s fun.  It’s different.  And, perhaps best of all, it makes a mess. 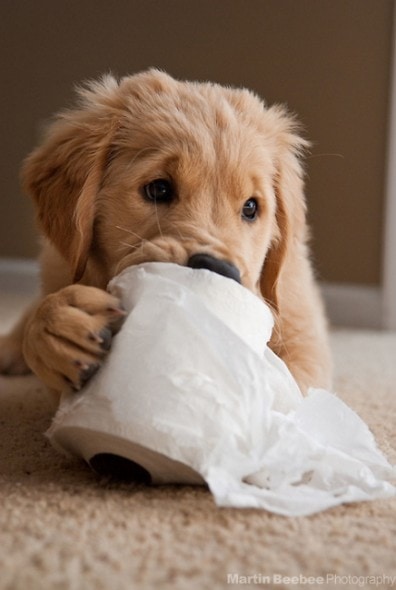 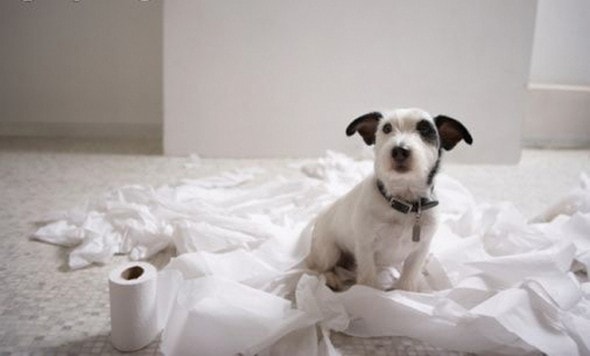 Maybe they simply have a desire to redecorate the place.  Make it a little homier.  Cushier.  Soft and cozy. 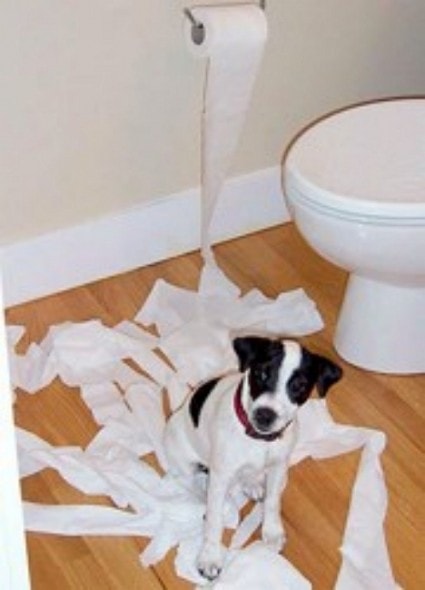 Whatever their reason, they seem to know, once their human had caught on to the frivolity, innately, they are busted.  And they also seem to think that if they look like they had nothing to do with it, they won’t get in trouble.  Funny, human children have that same instinct. 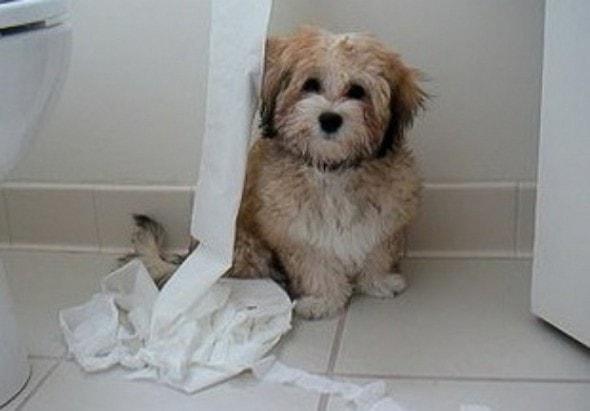 It can be hard not to laugh.  Afterall, what’s the purchasing of another roll of toilet paper really to the budget in the overall scheme of things? 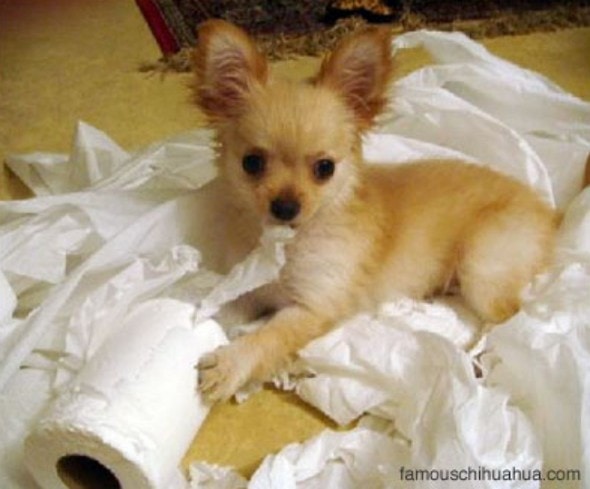 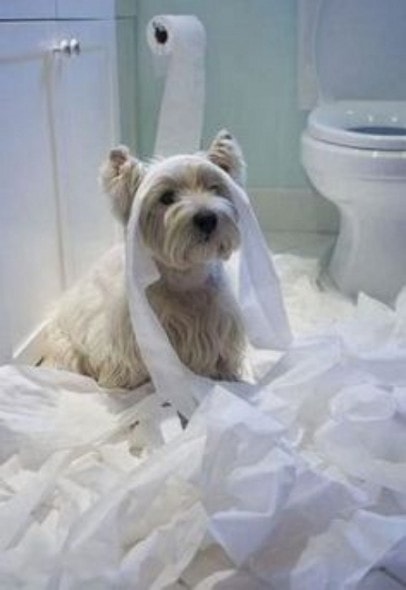 Oops.  Someone needs to learn how to get the toilet paper back on the roll.